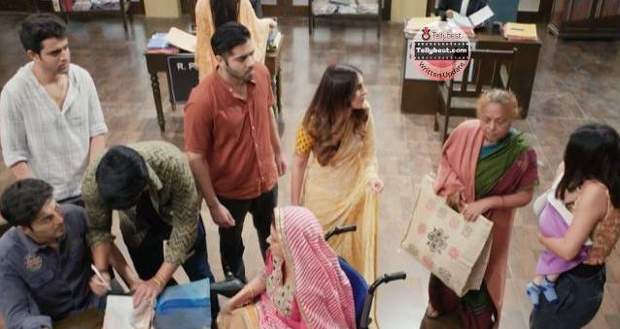 Meanwhile, Raavi and Rishita worry about the documents and Rishita even says that the whole family is filled with emotional fools.

On the other hand, diligently Suman gives Dev a magnifying glass to read the documents as Shweta is very cunning.

Gautam says it won’t work but Shweta worries that her truth will come out in the open.

Dhara invites Shweta to sign under her name but seeing this Shweta plays another plot and says that Chiku’s temperature is rising again.

Hearing this the Pandya brothers and Suman start to panic a little but Dhara rushes to check on Chiku and Shweta doesn’t let her touch Chiku.

Manipulatively, Shweta tells everyone to sign quickly without reading it as the court is about to close and she can’t come here every day.

Hearing this Suman says that she doesn’t want to see Shweta again so let’s do the signature and one by one all the Pandya brothers sign the documents.

Shweta talks to the lawyer through her eyes and signs the documents but before that she removes Chiku’s socks and the onions fall down.

Shwetha has kept the onions so that she can hide Chiku's fever as onions tempers with the body temperature.

On the other hand, in Harikishan and Jhankana’s house, Rina, a neighbour tells them that Shweta is trading Chiku for 25 lakhs.

At the court, Shweta takes the money and checks the bag of money.

Later at the Pandya house, Rishita and Raavi get happy with Shiva telling them that the paperwork is done.

Outside the house, Harikishan and Jhankana arrive and give them the letter that Shweta left them saying that she is leaving Somnath.

Harikishan and Jhankana hand Chiku over to Dhara and leave them.

As they enter the house, Dhara is surprised by Raavi’s and Rishita’s preparations and all of them welcome Dhara, Gautam, and Chiku with pooja and then shower flowers on them.

Later, all of them hug each other and celebrate Chiku’s welcome but Suman tells them that Chiku has a high fever.

Krish tells Dhara that they all planned a party for Chiku and her but now that he is ill the party has to be canceled.

On the other hand, the Pandya brothers plan the party on their own and Dhara gets happy seeing the togetherness of her family.

Dhara further feels guilty and asks Gautam when she called Dev, Shiva, and Krish her child then why she wants Chiku.

To this Gautam says that it is his fault that he didn’t believe his brothers even though his brothers are his lifeline.

Further, Gautam goes to his brothers and hugs them tightly saying that he loves them.

Shiva tells Gautam that for all of them Gautam is always right and they all love them immensely.

Hearing and seeing this the Pandya women get really happy.