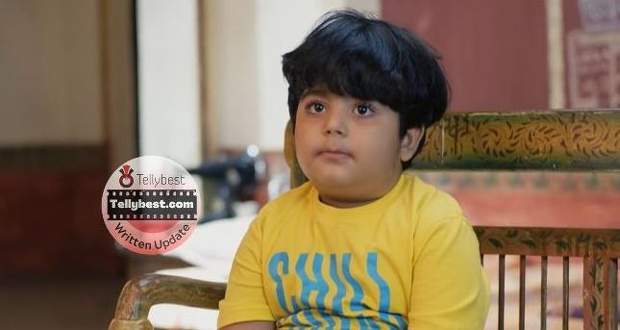 However, Shesh picks up the call by mistake, and Dev and Rishita are shocked to hear that Suman is very ill.

Rishita cuts the call by ordering Chiku to tell Dhara not to use Suman and Chiku whereas Chiku feels upset as instead of uncle Dev Rishita is the one who picked up the call.

On the other hand, Mithu tells Raavi that he does not want to go to school today as the boys will beat him.

Just then, Raavi gets a call from Chiku who begs her to come since Suman is very ill and Ravi orders him not to use these tricks.

Mithu then asks Raavi about Chiku but Ravi tells him that Chiku is no one and they need to stay away from Chiku.

Afterward, Chiku calls Krish who ignores it for the first time as he is busy celebrating with his newfound family.

Chiku again calls Krish but this time Krish picks up the call after noticing it is from India.

Before Chiku can say anything, Krish overhears the doctor saying that the next twenty- four hours are very critical for Suman.

With a poker face, Krish denies coming and cuts the call despite Chiku’s pleading.

Afterward, Suman is lying unconsciously in the hospital room as the sound of the monitor fills the room whereas Raavi looks at Shiva with concern.

On one hand, Dev and Rishita are sitting in their room in silence; on the other hand, Krish looks at his phone with zero expression.

Later, while Dhara and Chiku are sitting in the hall, Chiku tells her that he called all the uncles but they denied to come.

Dhara calls them heartless and puts Chiku’s head in her lap in an attempt to draw strength.

On the other hand, Raavi does not inform Shiva about Suman’s illness when he wakes up and even Shiva asks her why her face is looking like a broken radio.

Pushing Shesh out of the room, Rishita locks it while Shesh mumbles that he wants to enjoy his mom-dad’s fight.

Inside the room, Dev mentions that they should visit Suman last time as the only house and shop will remain after Suman’s death and Rishita agrees to go after thinking something.

Just then, Shesh breaks the window and when Rishita yells at him, he winks and says that he needed a way to watch the fight.

In the meantime, Raavi is packing the clothes when she gets a flashback about her trying to copy Dhara but she mumbles that the bitterness is so mixed in the relations that the sweet memories are just like dreams to her.

At the same time, entering the room, Shiva tells Ravi innocently that they are in Somnath only and also asks Raavi if they are going to visit Somnath temple.

Ravi just asks Shiva if he will go with her and Shiva says that wherever Ravi takes him, he will go.

On one hand, Krish informs his in-laws that he will come back very soon since nothing is left for him; on the other hand, Dhara urges Chiku to eat.

Once waking up, Gomby blames Dhara for Suman’s illness which makes Dhara teary eye but she does not say anything as she notices a doctor coming.

When the doctor asks Gautam if he is drunk, Dhara lies that it is a sanitiser smell and Chiku drags Gautam away.

Later, Gautam and Chiku are spending some quality time together whereas Rishita and Dev look at the Pandya house with moist eyes.

© Copyright tellybest.com, 2022, 2023. All Rights Reserved. Unauthorized use and/or duplication of any material from tellybest.com without written permission is strictly prohibited.
Cached Saved on: Wednesday 25th of January 2023 10:41:18 AMCached Disp on: Thursday 9th of February 2023 04:14:04 AM