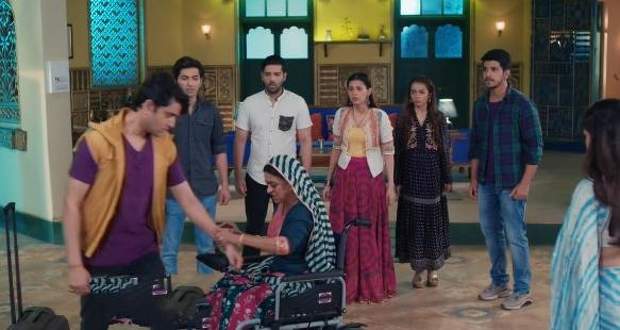 Today's Pandya Store 21st July 2022 episode starts with Raavi stating she knows where Krish is and shows a post of Keerti which states that something life-changing is going to happen to her in the next few hours.

Rishita gets angry while Dhara tells her to call Keerti and talk to her.

Keerti gets tensed seeing Rishita calling but Kamini picks up the call and tells her to not call Keerti and handle Krish instead.

Further, Rishita starts having panic attacks and Dhara tries to help but Rishita pushes her blaming her for everything.

Meanwhile, the Pandya brothers keep looking around for Krish.

Elsewhere, Krish keeps calling Keerti anxiously while she wonders if he got the money or not and refuses the calls thinking that she won't live in that small Pandya house.

Krish worries if Keerti will arrive or not while the Pandya brothers come there.

Krish takes a stick and a rock and threatens his brothers with them while they try to convince him to return home.

Dev and Shiva try to persuade him by telling him that they will get him married to Keerti if she comes to the location.

However, Keerti's phone is switched off while Krish still thinks that Keerti is on her way home.

Just then, Keerti comes there in the rickshaw which makes the Pandya brothers fear.

However, when Krish rushes to hug Keerti, she pushes him away and tells him that everything is over between them.

When Krish tries to talk to her, Keerti accuses him of lying about online trading and further belittles him and his lifestyle along with the Pandya family.

Shiva thinks to interrupt but Gautam holds him back saying that they should let Keerti speak as it will benefit them.

Keerti further tells Krish that he is so lazy that he would have even agreed to be a live-in son-in-law.

Lastly, Keerti slaps Krish to make their breakup official and leaves in the car with Kamini while Krish breaks down.

Later, the Pandya brothers return home and Krish silently takes out the money from the bag and puts it on the table as the family members look on.

Suman goes to Krish and slaps him while Rishita glares at him.

© Copyright tellybest.com, 2022, 2023. All Rights Reserved. Unauthorized use and/or duplication of any material from tellybest.com without written permission is strictly prohibited.
Cached Saved on: Tuesday 22nd of November 2022 12:43:53 PMCached Disp on: Thursday 1st of December 2022 10:14:14 PM