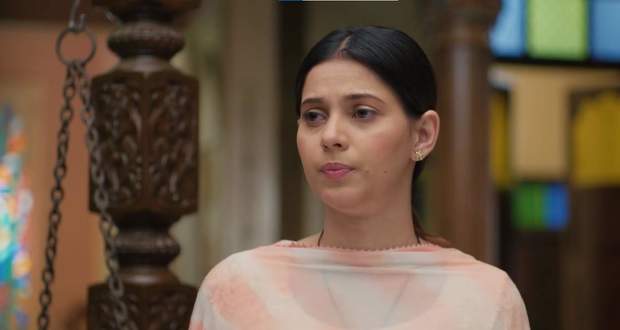 Today's Pandya Store 21st June 2022 episode starts with Gautam sitting with an unreadable expression while Dhara and Dev rush to him.

Rishita sees the message on her phone and informs Suman that Raavi has transferred all the money to Gautam's account.

Just then, Raavi returns home and Dhara scolds her for going out without informing anyone.

Gautam questions Raavi while she says that she is doing it for Shiva and believes that he is going to return one day.

Raavi goes to Suman and hugs her while the family joins in turning it into an emotional family hug.

Meanwhile, in the village, Shiva tries to inform Surbhi that he is married but she misunderstands it as a confession and rushes to inform her parents.

Back at the Pandya house, Prafulla comes with the police with the accusation that they have kidnapped Raavi but feels embarrassed when they see Raavi happily standing there.

Raavi apologizes to the police for wasting their time while Prafulla acts worried for her.

Meanwhile, Surbhi helps Shiva walk with the help of a stick while Rakhi comes there.

However, Rakhi reveals that she knows and tells him that he should be happy as his family considers him dead at the moment.

At night, Shiva tries to escape but makes an excuse after making a noise and waking up the whole family.

The next morning, the Pandya family prepares to reopen their shop while Dhara gets emotional and says that the joy of the shop, Shiva won't be there.

However, Raavi goes to her and comforts her saying Shiva will return and that he is in their minds for the moment.

Meanwhile, Shiva has run away from the villager's house and is roaming in the jungle while Rakhi's husband rushes to find him.

Meanwhile, Shiva stumbles upon a man working in the jungles and requests his phone.

Shiva calls Gautam but disconnects as he hears the sound of people looking for him.

Shiva tells the man to inform the person to call that Shiva called if he gets a callback and again tries to run away but gets caught.