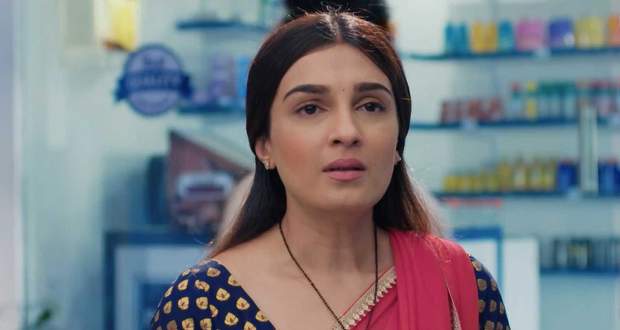 Today's Pandya Store 21st May 2022 episode starts with a disheartened Gautam getting out of the bank.

Janardhan stops him at the exit and provokes him. He tells him that if he needs money he can work as a driver for him.

Gautam not caring about Janardhan’s words says that he will never bend in front of him and will never come to Janardhan seeking help.

Rishita and Dev are leaving for Ahmedabad. Rishita remembers Gautam’s words about not taking help from Janardhan and is worried about him.

In the meanwhile, Raavi searches for Suman all over the house.

On asking the neighbors, she gets to know that Suman hurriedly rushed towards Rishita’s house. Raavi immediately calls Shiva and tells him about Suman. Both of them run to search for Suman.

Suman sees Dev and Rishita in a car and calls out for them but they are unable to hear her as the windows of the car are closed.

She goes behind the car continuously shouting for Dev but to no avail. While following the car, she stumbles upon a road crack and is about to fall when Raavi and Shiva save her.

Suman is so shocked by the fall that she is unable to breathe or speak and is completely paralyzed. Shiva and Raavi immediately rush her to the hospital.

Gautam tells Dhara about his encounter with Janardhan. While talking to her, he gets a call from Shiva about Suman’s accident.

On reaching the hospital, the doctor says that Suman has had a paralytic attack and the condition seems severe. Dhara consoles everyone by saying that Suman will be fine in no time.

Raavi says that she will never be able to forgive Dev and Rishita after this, and tells everyone the whole story.

Dhara says that she will bring Dev home at any cost.

Dev and Rishita reach Ahmedabad, but Rishita is not happy.

Dev tries his best to make her feel better. He ignores the constant calls of Gautam and Dhara to make sure Rishita has his attention.

Suman is shifted to the ICU and is unconsciously calling out for Dev.

Shiva goes to Janardhan’s house and asks Kamini where Dev is. On denying to give out the information Shiva forcefully puts her into his tempo and leaves to search for Dev.