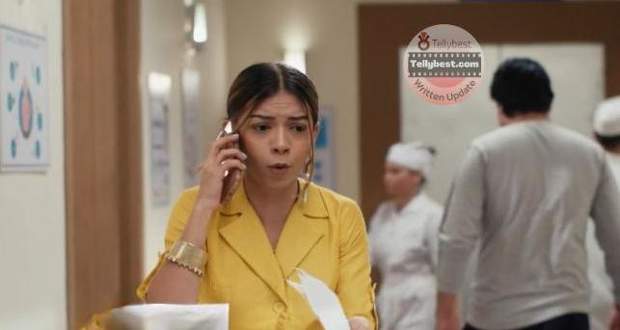 Today's Pandya Store 21st November 2022 episode starts with Rishita watching the CCTV footage intensely but before she can see Swetha, a nurse arrives there and Rishita gets distracted.

After the nurse walks away, the worker plays the video again and Rishita questions him about the doctor’s name.

With a weird look, the worker informs Rishita that the doctor in the footage is named Dr. Desai and Rishita walks away.

On the other hand, entering Dr. Desai’s cabin, Swetha lies that her sister needs the doctor now and throws some liquid on the floor so as soon as Dr. Desai stands up to leave, he slips on the liquid and hitting his head on a nearby flower pot, he falls unconscious.

Swetha smirks looking at the unconscious doctor while murmuring that sometimes people need to do drastic things to keep themselves safe.

Later, when Rishita enters the cabin, she finds the room empty.

Meanwhile, Gautam drops Raavi and Dhara off in a new rented place and walks away.

Dhara arrives there at the same time and tells Raavi that soon they will enter the Pandya house with full pride.

Swetha who is watching Rishta from hiding behind a pillar thinks Rishita is smart but not like her.

In the meantime, while walking in the market, Jhankana is thinking about Dhara and mutters under her breath that she knows Dhara cannot do any wrong.

Looking up, she notices Dhara walking towards her and requests Dhara to come home with her for some time, and Dhara nods.

Meanwhile, in Pandya’s house, Gautam scolds Shiva for misbehaving with Dhara and Raavi and for not trusting Raavi.

Even Krish tries to talk some sense into Shiva’s mind but angry Shiva walks away ignoring Krish and Gautam both.

Later, looking at the empty house, Suman feels sad while thinking about the happy memories and wipes away her tears.

On the other hand, Krish extends his hand for friendship to Swetha who has just come back home and lies that she went to buy some medicines.

In the meantime, Shiva is walking on the road while thinking about Raavi and Dhara’s words and noticing a fighting poster, Shiva decides to fight to let out some anger.

© Copyright tellybest.com, 2022, 2023. All Rights Reserved. Unauthorized use and/or duplication of any material from tellybest.com without written permission is strictly prohibited.
Cached Saved on: Monday 21st of November 2022 11:20:35 PMCached Disp on: Monday 5th of December 2022 12:52:14 AM