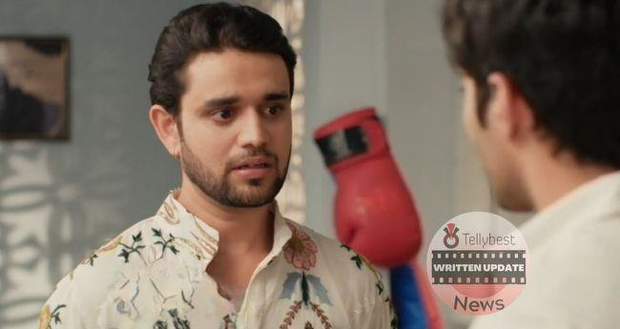 Today's Pandya Store 21st October 2022 episode starts with Krish messaging Shweta as he was admiring her pictures and couldn’t resist the distance between them.

Meanwhile, Shweta is sleepless as she is waiting for the morning so she can run away with the property papers.

Krish tries to make a conversation with her but she uninterestedly refuses.

However, Krish requests Shweta to come to her room’s door and slides in a heart-shaped love card.

Inside the room, Shweta picks up the card and writes her reply and slides the card out and goes to sleep.

She let Krish get happy for a few hours of happiness as she will run away soon.

In the morning, Dhara gifts Shweta a pair of gold earrings and she admires them.

Suman taunts Rishita to give a gift to Shweta and Rishita gives a pair of silver anklets.

Rishita gives the gift to Shweta while Suman tells Rishita that the anklets are smaller than her feet.

Everyone is unhappy with the anklet but Rishita exclaims that the thief stole the gold earrings she bought.

Later, Raavi gives diamond earrings to Shweta and her eyes light up but Rishita taunts Raavi for flaunting her money.

However, irritated Shweta prays to god to let her slap Rishita one time before she goes.

Shweta slams the box of diamond earrings in Rishita as a gift to Chutki.

Dhara tries to stop Rishita from taking the earrings from Shweta but she keeps the box happily.

She scolds Rishita and advises her to let go of her childishness but she exclaims that the family will thank her for keeping the earrings later.

Just then, Shweta's parents arrive and give the gift to the Pandya family.

When Suman gets a diamond necklace she makes a hen-like shocked face.

Dhara tries to refuse Shweta but she gives her the necklace forcefully.

Meanwhile, they give a gift to Shweta and Chikoo and she opens it thinking her plan is successful.

However, Shweta gets shocked when she finds Dhara’s name as Chikoo’s custodian.

Shweta's mother declares the news and tells everyone that Chikoo’s account will get 2 lakh rupees in his account every month and Dhara will decide how to use that money judiciously.

She tells Dhara will take every financial decision regarding their trust till Chikoo turns 18.

Shocked Dhara confronts her mother for taking the decision without asking and points out that Shweta deserves the custodian position as Chikoo’s mother.

Shweta's parents leave Shweta penniless with her dream of going to Dubai down in the gutter.

© Copyright tellybest.com, 2022, 2023. All Rights Reserved. Unauthorized use and/or duplication of any material from tellybest.com without written permission is strictly prohibited.
Cached Saved on: Monday 21st of November 2022 07:31:49 AMCached Disp on: Friday 9th of December 2022 03:51:43 AM