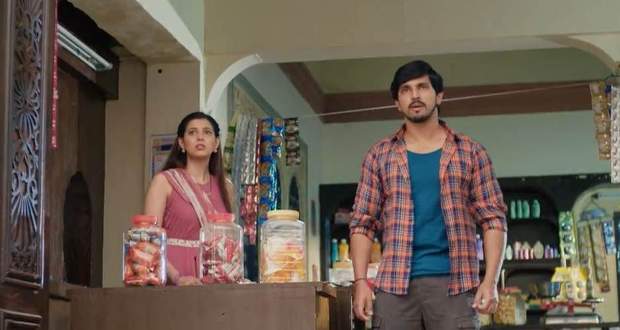 Today's Pandya Store 22nd April 2022 episode starts with Rishita arguing with Shiva and Raavi but she is stopped by Dev.

Dev asks Suman’s blessings for his new business and says that he is doing the business for his family and child.

Dev touches Suman’s feet, which makes her emotional, she blesses him concealing her emotions and then leaves immediately.

Gautham also blesses Dev and wishes him luck, and then both Dev and Rishita leave.

Shiva gets frustrated, but Gautham tells him that he fears Dev competing with him and asks him to face it.

The new Pandya store opens, Rishita is excited, while Dev is a little disturbed.

Meanwhile, Shiva gets the brochure of the ‘Growing Business Competition’.

Shiva goes to the Pandya store finding Dev in the new store right in front of them.

At the Seth house, Janardhan is worried about whether Dev would give the store to his family once they get together.

Kamini asks him to stay calm and tells him to send Dev to the suppliers outside the state so that they get time to plan something.

Suman refuses to visit Dev’s store, as it is set up by his hard work.

Shiva and Raavi get anxious as no customer had come to their store.

Shiva then alters the price and gives discounts to attract customers.

Meanwhile, Gautham goes to Dev’s store but he returns back without seeing Dev when he hears a customer asking Dev about getting separated from his family.

Janardhan sends Dev to Delhi stating that the stocks are less.

The discount brings some customers to the Pandya store, but Raavi says that they should invest as the discount is not a permanent solution.

Shiva thinks about the ‘Growing Business Competition’ and starts reading the brochure.

That night, Gautham gets emotional finding two brothers fighting on the road and thinks of Shiva and Dev.

Later, he is taunted by Janardhan regarding the spilt of the Pandya family.

He vows to shatter the Pandya family to pieces.