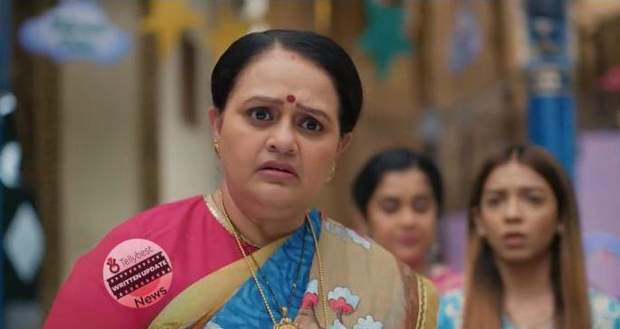 Today's Pandya Store 22nd August 2022 episode starts with the Dwivedi family biding goodbye and leaving before telling them that they will send the cradle as it's their tradition.

Later, Shiva overhears Raavi refusing a deal worth two lakhs and tells her to go as she's useless at home anyways.

Raavi disconnects the call with Aayushi and scolds Shiva for taunting her during a client call which leads to them arguing once again.

Being angry at Shiva, Raavi calls Aayushi and tells her that she will do the deal for about two lakhs.

Leaving the room, Raavi looks back at Shiva and tells him to be happy without her.

Elsewhere, Dhara changes Chutki's clothes as she peed and gives them to Rishita while talking to Suman about buying new clothes for Chutki for the naming ceremony.

However, Rishita notices that Dhara has made Chutki wear Chiku's old clothes and removes them saying that she doesn't want a stranger's clothes on her baby.

Dhara gets silent at the poisonous words coming out of Rishita's mouth as she warns Dhara that she will not accept it the second time.

At night, Swetha gets frustrated as she isn't able to handle Chiku's crying and thinks that Chiku is safer with Dhara only.

On the other hand, Dhara wakes up and feels worried about Chiku while Gautam pacifies her by telling her that she can call them in the morning.

The next morning, Swetha's mother comes to the Pandya house with a crying Chiku in her hands but Suman stops Dhara from holding Chiku.

All the family members oppose Chiku's entry into the house and demand Swetha's mother to leave.

Swetha's mother tells them that Chiku hasn't stopped crying ever since they left which makes Dhara cry for him even more.

Suman tells her that she won't let them play with Dhara's emotions and closes the door on her face.

However, Swetha's mother barges in and begs Dhara to become like Yashoda and takes care of Chiku while giving her Chiku.

Swetha reveals that Swetha had suffered from a panic attack and is hospitalized while begging Dhara and Suman to help her.

Dhara announces that she will take care of Chiku until Swetha recovers shocking the whole Pandya family.