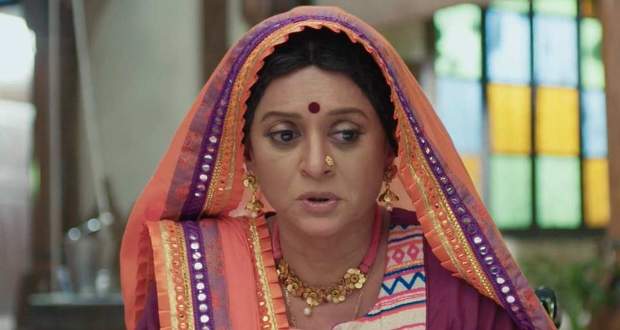 Today's Pandya Stores 22nd February 2022 episode starts with Suman complaining about how Raavi had made Shiva's life hard and how she also sent him to jail in the past.

Suman says that she’d file a complaint against Raavi, Prafulla, and Anita.

However, Dhara convinces Suman to wait for a week within which Raavi can prove her innocence.

Whilst here at Prafulla's place Raavi pretends to unpack her clothes, Prafulla barges in.

She offers Raavi to help unpack her clothes but Raavi refuses her help and asks her to invite Suman to the party.

Furthermore, Dhara is convincing Suman to back away from the idea of filing a complaint against Prafulla, Anita, and Raavi.

Later, Prafulla invites Suman to Raavi’s breakup party and says that the Pandya family would be her star guest that night for the party.

Suman tries to find a reason to avoid going to the party but Prafulla insists that she’d go to Pandya Store and invite them personally.

Elsewhere, Shiva vents all his anger on Dev and starts ranting about his work at the store.

Dev gets enough of his rants and says Raavi was right while naming Shiva as “bandhar.”

Gautam stops the heated argument between Dev and Shiva, Gautam informs them about Prafulla’s visit.

After a successful escape from the Café, Krish and Keerthi contemplate their meet-ups in the future.

Prafulla visits Pandya Store and invites Dev, Shiva, and Gautam to the party.

Later in the evening, Suman asks if they were all ready with the plan they came up with, while Krish shows up with a bag that Suman had asked him to bring.

Rishitha gets a call interrupting her meeting.

Raavi gets all joyous witnessing the Pandya family dancing and marching towards Prafulla’s house.

Raavi with her happy grin awaits at the doorstep. Anita freaks out watching all the hustle and bustle.

When Prafulla and Anita were busy watching drummers, Raavi uses this opportunity to spike Prafulla’s drink and offers it to her.

Prafulla accepts the drink and gulps it at once.