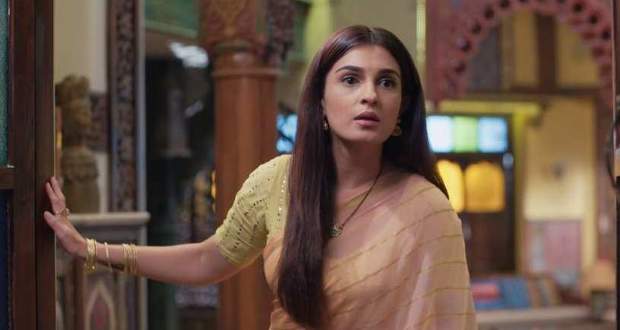 Today's Pandya Stores 22 January 2022 episode starts with Dhara trying to escape from the eyes of Rishita.

Meanwhile, Rishita is searching if anyone is there in the house. She almost sees Dhara but Dhara somehow manages to escape from there.

Shiva and Suman reach home. Shiva calls Gautam and asks if he has any update about Dhara but Gautam says the police are trying to find her and Dhara would never kidnap a baby.

Gautam asks Shiva about Raavi and says that he thinks Raavi is innocent and must be in danger as Kamini would take advantage of the situation.

At the same time, Krish comes to Gautam and Gautam tells Shiva that he wants to see the entire family including Raavi together till the next day’s morning.

Shiva goes to Prafulla's house and starts asking for Raavi but she says she does not have any idea about where is she and Shiva starts breaking everything in the house.

Later, Shiva comes back home and then Rishita tells him that they can trace Raavi through her phone number.

At the same time, they hear a baby crying while Dhara tries to make Tara quiet in the storeroom. Meanwhile, Shiva enters the storeroom but Dhara hides immediately.

Shiva says to himself that before the police file a case of kidnapping against Dhara he has to find her.

On the other hand, Dhara is frustrated as no one in her family is trying to understand her and wants to snatch Tara from her.

In the meantime, Shiva is searching for Dhara and Raavi by showing their photos to everyone around.

Even Prafulla is trying to find Raavi. But they don't get any clue.