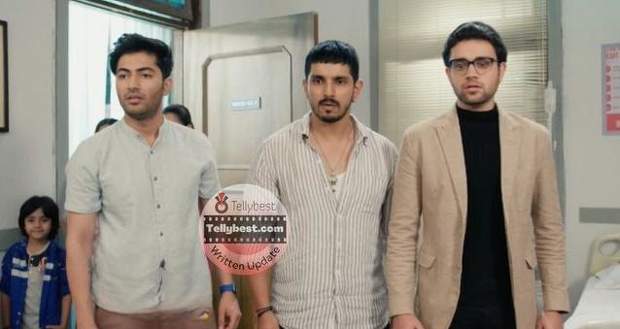 Today's Pandya Store 22nd January 2023 episode starts with Rishita and Dev looking at the Pandya Nivas with mixed emotions as the wind ruffles their hair.

Rishita gets dizzy recalling the Uttarayan memory when she lost her Chutki and her harsh words towards Dhara.

Meanwhile, Shiva is walking towards the Pandya Nivas cheerfully and he asks Raavi since they live in Somnath then why they traveled in a bus.

Raavi tries to remind Shiva that they were living in Baroda but Shiva walks away after ordering Raavi to stop this Baroda radio.

However, Raavi dreads facing the Pandya Nivas as the memory of Shiva’s accident rushes back to her.

She even starts breathing faster while clutching the suitcase handle with all her strength.

On the other hand, Mithu taps on Shesh’s shoulder but Shesh pushes Mithu away resulting in Mithu calling his mom.

Rishita apologizes to Mithu for Shesh’s behavior but she gets surprised to see Mithu hugging Raavi.

At the same time, Raavi looks up, and when her eyes meet Rishita’s eyes both of them stare at each other with faint smiles since they are not able to surpass the bitter-sweet memories.

In the meantime, Shiva asks Dev where he went and while Dev stands there in shock, Shiva hugs him tightly since for him everything is the same.

At first, Dev just stands there like a puppet but when Shiva remarks that he has hugged him multiple times but this time it feels different, Dev is unable to control his tears and puts his hands around Shiva.

Dev even tells Shiva that these seven years have felt like seven Janam (lifetimes) to him while Rishita and Raavi silently.

Afterward, kneeling in front of Shesh, Shiva calls him Chutki and asks Rishita why Chutki is wearing male cloth.

Rishita tells Shiva that it is her son Shesh which makes Shiva confused but he does not say anything else.

Everyone then turns to look at Pandya Nivas with somber expressions and crosses the threshold while the memory of their Griha Pravesh passes through Raavi and Rishita’s minds.

Just then, a fancy car stops in front of the Pandya Nivas, Krish comes out of the car and his face hardens as he recalls how Dhara humiliated him and Dev blamed him for Chutki’s abduction.

Shiva happily tells Krish that he is looking like a "masala pappad" while Dev and Rishita look away in pent-up anger.

Shiva even embraces Krish in a hug but Krish just stands there in silence.

When Shiva asks Krish if he is not going to college, Krish asks him if he is okay and Shiva announces that he is all right.

Rishita then taunts Krish by saying that he has printed so many notes that he is a billionaire now and Shiva also comments that Dhara and Gautam must have raised his pocket money.

When they are about to knock on the main door, Rishita orders Dev not to get too emotional seeing Dhara and Gautam.

Later, Chiku opens the door and gets extremely happy to see the rest of the Pandya family standing there.

Chiku urges Gautam to come to the door and when he arrives at the door, he gets extremely emotional and stands there in shock.

While everyone stares at each other in complete silence, Chiku brings confetti to welcome them and announces that his family is complete now.

However, Shesh starts snatching it from Chiku's hand and Mithu also joins in, Rishita calls Chiku as "typical Dhara" in a stern voice.

When Chiku mentions that his name is Chiku Pandya, Shiva announces that he cannot believe Chiku is grown up now.

Entering the house, Rishita pushes Chiku intentionally which makes Gautam angry and he yells that she can understand Rishita's anger for him but he will not tolerate mistreating his son.