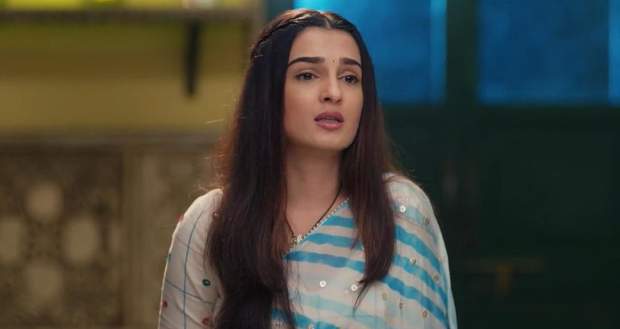 Seeing Krish's behavior, the Pandya brothers and Raavi try to lighten the mood but their tactic doesn't work as Suman goes towards Krish and slaps him.

Already expecting the slap, Krish does not turn away and willingly accepts the slap for his mistakes while Suman berates him.

Further, Suman drags Krish towards the main door saying that she is going to kick Krish out of the house when Dhara intervenes.

Dhara argues that she will leave too if Krish is kicked out while the other family members try to come up with other punishments.

However, Dhara says that Krish will not do anything and tells him to apologize to everyone.

Human berates Krish for not apologizing and further questions if he has ever earned a dime in his life which makes Krish feel as if everyone is against him.

The family argues about whether Krish should continue going to college or not while Krish bursts into anger and leaves saying that no one is thinking of his feeling.

Suman stops Dhara from going after Krish but Dhara reasons that even though he did wrong by stealing the money, he is still hurt as his love for Keerti was true.

Later, Rishita still insists on giving a harsh punishment to Krish but gets told to keep her mouth shut.

Meanwhile, Dhara tries to get Krish to eat but he behaves rudely to her and tells her to leave.

Further, he reveals to her how he has stolen even jewelry before and drank beer which shocks Dhara.

Krish starts spiraling down in his anger and says that he loved Keerti with his heart and did all the things for her but she never loved him.

Dhara leaves the room while Krish shuts the door behind her loudly.

Going to her room, Dhara breaks down and reveals Gautam Krish's confessions saying that he didn't even feel guilt while accepting his crimes.

Dhara blames herself saying that she didn't raise Krish properly while Gautam comforts her saying she is not at fault.