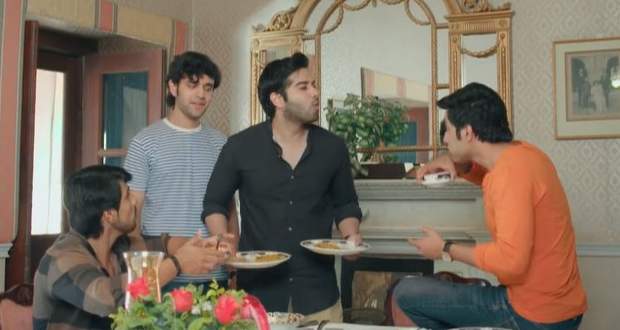 Today's Pandya Store 22 May 2021 episode starts with Gautam teasing Dhara and telling her if she can stay away from Shiva and Dev.

Later, Dhara serves Krish and Gautam and goes into the kitchen while Dev and Shiva steal their breakfast and start eating it.

Raavi and Rishita look over from afar and laugh.

Prafulla and Suman argue while Prafulla thinks of taking revenge by using Raavi.

Dhara sees Dev and Shiva and scolds them while they hug her.

Suddenly, a car honk sounds and Dhara tells them to let go saying that Suman might have come.

Prafulla taunts Suman seeing the expressions on the family while Raavi tells her to not speak of it.

Dhara tells Shiva and Raavi that she wants to talk to them while Rishita overhears them and thinks that Dhara is being partial.

Meanwhile, Krish apologised to Rishita and hugs her but she pushes him off and tells her to stay away from her.

Dhara tells Shiva and Raavi not to fight in front of Suman as she feels embarrassed while Raavi asks about the kitchen situation.

Dhara tells them that it's their problem while Suman looks over from afar and thinks that they are arguing.