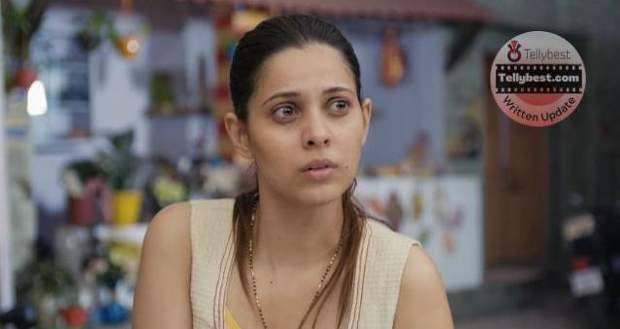 Today's Pandya Store 22nd November 2022 episode starts with Shiva telling the ticket counterman that he will fight with the boxer.

Hearing this, the man questions Shiva if he is sure about this and after giving the entry fee, Shiva announces that he is hundred percent sure about this.

While the boxer mocks Shiva with a smile, Shiva informs the attendance his name with an angry growl.

Meanwhile, Dhara tells Jhankana and Harikishan that she is using fund money for Chiku’s upbringing when Harikishan sarcastically remarks that Dhara is using the money in the wrong way.

Dhara further adds that if they want they can make Swetha Chiku’s custodian, she does not have any issues.

While Harikishan angrily walks away, his feet accidentally knock the photo album down.

Dhara bends to pick it up when she gets shocked to see Swetha with the same junior doctor.

Looking at Dhara’s shocked face, Jhankana clarifies that it is Nitin, Swetha’s friend.

After quickly mumbling an excuse, Dhara walks away from there.

On the other hand, when the boxer starts to fight with Shiva in the boxing ring, Shiva does not fight back while Raavi and Gautam’s accusations continuously ring in his ear and he thinks this pain is nothing compared to his heartache.

In the meantime, while walking on the road, Dhara puts two and two together and exclaims that she never thought Swetha will do this.

Dhara meets Rishita as soon as she reaches her rented home and invites Rishita into the home.

Elsewhere, Shiva just silently takes the beating without any fight while recalling everything that happened in his life.

After rising from the floor, Shiva signals the boxer to beat him.

Meanwhile, Rishita narrates everything that happened in the hospital, and Raavi and Dhara listen carefully.

When Rishita mentions she thinks the junior doctor was acting nervous, Dhara informs them Dr. Nitin is Swetha’s friend who told them about Raavi’s pregnancy.

On the other hand, in Pandya’s house, Suman scolds Swetha for making bad tea while pointing out if Swetha is playing there for a long time.

With a smirk, Swetha thinks she is indeed playing and slowly she will isolate Suman in this big house without her sons and daughters-in-law.

Meanwhile, Shiva falls unconscious after taking a beating for a long time in the boxing ring.

On the other hand, Dhara announces that this time they will set a trap for Swetha so she herself accepts her evil plans.

© Copyright tellybest.com, 2022, 2023. All Rights Reserved. Unauthorized use and/or duplication of any material from tellybest.com without written permission is strictly prohibited.
Cached Saved on: Tuesday 22nd of November 2022 11:31:59 PMCached Disp on: Saturday 10th of December 2022 02:09:01 PM