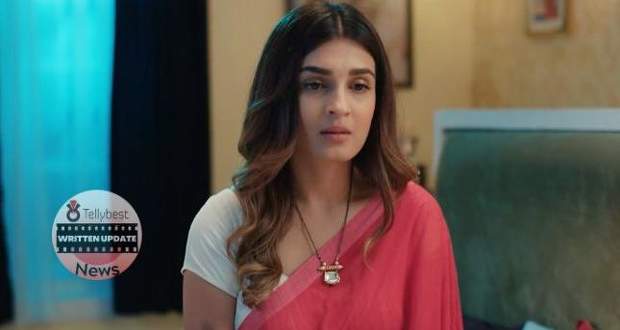 Suman however reminds Dhara that it is a huge responsibility and angry Shweta glares at Dhara with pure anger.

Dhara then turns to Shweta to tell her that she will never take any decision without her permission and Shweta announces that she trusts Dhara with all her heart.

Afterward, Shweta runs away from there after giving an excuse for a headache.

After Shweta walks away, Rishita starts laughing and announces that every Pandya daughter-in-law gets into trouble after their marriage so Shweta should get adjusted to it.

Dhara urges Rishita to stop laughing and Dev tells everyone that Shweta is the reason for everyone's headache and Shweta looks at him with wide eyes.

Meanwhile, Shweta yells in frustration that her parents do not care about her while angry tears roll down her cheeks.

Gautam, on the other hand, expresses his worry about Dhara getting a huge responsibility but Shiva reminds him how Dhara was the one who helped Pandya Store to get out of the financial loan.

Rishita also adds that she will help Dhara with accounts and Dev remarks that Rishita has talked sensible something after a long time.

Dhara then announces that she will not use a single penny of Chiku's trust fund to raise him and everyone agrees.

Afterward, everyone slowly puts their hand on top of each other, and Suman gets upset to see Raavi and Shiva's hesitation.

Suman even puts Chiku's hand on top while everyone looks at him with love.

Meanwhile, Shweta runs away from Pandya's house to confront her parents.

Later, while her parents are discussing Dhara's custody, Shweta enters and accuses them of betraying her.

She even refuses to go back to Pandya's family as they are low-class people but her mom reveals that they know about Shweta's boyfriend Deven.

Shweta at first accuses Dhara of telling her parents about Deven but when her mom announces Dhara has nothing to do with it Shweta starts manipulating them.

However, Shweta's parents stay firm in their decision and order Shweta to go back to Pandya's house otherwise she will be homeless.

On the other hand, Arnav arrives at Pandya's house to congratulate Krish on his marriage while Shiva looks at Arnav with envy.

Krish then goes to bring Shweta to meet Arnav but gets shocked to see the room empty.

© Copyright tellybest.com, 2022, 2023. All Rights Reserved. Unauthorized use and/or duplication of any material from tellybest.com without written permission is strictly prohibited.
Cached Saved on: Monday 21st of November 2022 07:43:39 AMCached Disp on: Wednesday 7th of December 2022 12:36:38 PM