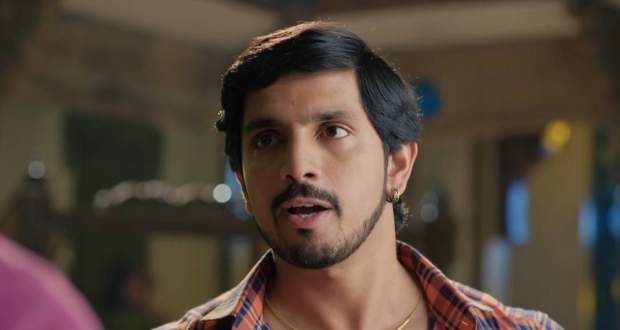 He gets infuriated and starts to attack Janardhan only to find that he was imagining the whole thing.

Shiva asks Krish about how to check the brochure of the ‘Growing Business Competition’.

Krish mocks Shiva and says that he wouldn’t be selected, but later he agrees to help him.

Krish tells him that there is a selection process and in that only ten people will be selected.

He says that he has to share his business idea on phone and then get selected to go to the new round.

He says that the phone line is open only till 10.30 pm the next morning.

As Gautham walks back, a man chases him and threatens Gautham to give him his belongings.

Gautham fights the man, he grips his hand and pushes him back.

However, Gautham runs and is hit by a truck.

His head starts bleeding and he lay unconscious on the ground.

Shiva calls Gautham to talk about the competition but, can’t connect with him.

In the house, Suman is disappointed with Gautham as he is trying hard to bring the family together but gets upset all the time.

Raavi hands Suman the earnings of the Pandya store but Suman gets upset to find the earnings go down, and asks Raavi to keep it herself.

Meanwhile, Rishita gets excited about the profits of the new store.

Kirti suggests that Rishita participates in the competition but she refuses.

On the contrary, Shiva gets anxious about the competition and talks to Raavi about his capabilities.

She tells him that he is capable of anything and asks him to believe in himself.

However, he doesn’t reveal to her about the completion.

The next day, an ambulance comes with Gautham injured in his head, along with Dhara and Hardik.

Dhara tells the family that last night someone called from Gautham’s phone and told her about the accident.

The whole family is put in shock and tension as they see Gautham injured.

Dhara feels that the family is hiding something from her, while Suman is confused about how to inform Dhara regarding Dev’s new store.