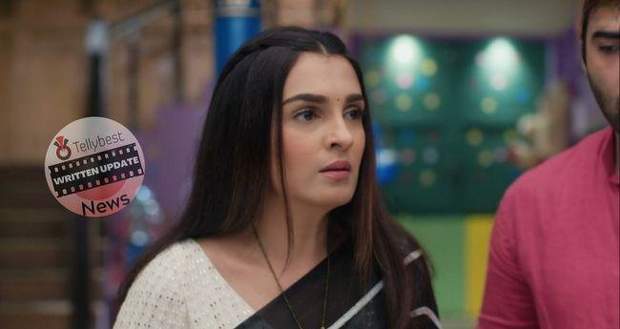 Today's Pandya Store 23rd August 2022 episode starts with Dhara stating that she will take care of Chiku until Swetha gets better.

Swetha's mother thanks Dhara and leaves while the family members are reluctant about her decision.

However, Dhara angrily tells the family members to not worry about her and focus on Chutki's naming ceremony.

Rishita, as always, accuses Dhara of casting an evil eye on Chutki by talking about such things and says that Dhara is sadder about Chiku and she is happy for Chutki.

Raavi stands up for Dhara and talks to Rishita saying that she's not understanding what Dhara meant.

However, Rishita keeps singing her song and states that Dhara will even name Chiku on the same day as Chutki for her satisfaction.

Surprisingly, Raavi says that there is nothing wrong with that and proposes getting Chiku and Chutki named together on the same day.

Rishita furiously states that she won't share Chutki's special day with anyone else and leaves from there.

Dhara tells Dev to not feel bad for her and asks how Rishita can be rude to a child after becoming a mother herself.

Later, the family sits together and discusses names for Chutki when Rishita announces that only her name will be final.

On the day of Janmashtami, everyone is preparing for the naming ceremony when Shiva and Raavi collide and fall on the swing together.

They both realize the people around them and get away from each other shyly as the guests tease them about romancing everywhere.

The guests compliment Dhara and suggest naming Chiku today only but Dhara says that Chiku's mother will do it.

Later, Kamini arrives there as Rishita tells Dev that she doesn't want Dhara to create any drama at the naming ceremony.

Meanwhile, Raavi accidentally collides with a guest and her phone turns the call on speaker mode.

On the call, the manager is scolding Raavi and threatening to spread the news about her unprofessionalism and how her husband insults her if she doesn't come for the shoot.

Raavi gets angry and tells the manager that she is crossing her limits.