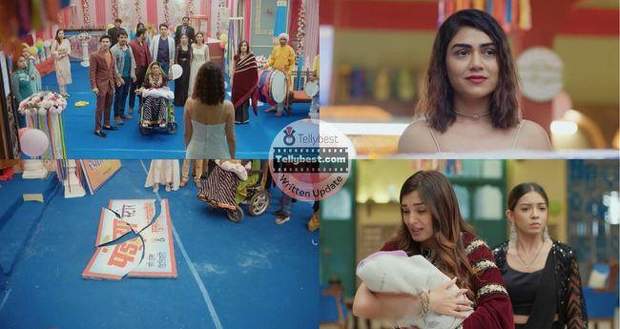 Seeing her and the notice the Pandya family gets shocked and angry and Shweta calls workers with a banner with her name on it.

Suman asks for what is written on the board and Rishita tells that the board says Shweta store.

As Shweta commands the workers to put her name banner in front of the store all the Pandya brothers step up and Shiva says that he will beat the hell out of the workers.

Hearing this Shweta tells them to see the notice to which Dev objects and says that this is their shop.

Smirking Shweta says that they gave her this shop yesterday at the registry office and they all remember that they all signed the papers.

At the same time, the Police come and the Pandya brothers ask for their help but Shweta manipulates the Police and says that she called the police.

The police say that she can put her board on the store as it is her own store now.

The Pandya brothers try to tell everyone that it is their store but the police push all of them into the corner.

Seeing their husbands like that all the Pandya women try to stop them from taking the board but the lady constable pushes them to the floor.

All the Pandya brothers rush and pick up the ladies and they again try to take on the workers again but the police keep them away.

Now as per Shweta’s orders, the workers throw the Pandya store board and it breaks.

Seeing the broken board all the Pandya’s drown in past memories and Suman curses Shweta to never be happy in her life.

A smug look appears on Shweta’s face and she tells the Pandya brothers to take the pieces of their board which represent their house.

Gautam rushes to join the broken board but he gets his hand cut. Seeing her husband devastated, Dhara reaches for the notice and tears it into pieces.

Dhara confronts Shweta and Shweta says that this is their reality whether she accepts it or not.

The neighbors start saying that the Pandya families’ drama has taken to the streets and Shweta walks over the Pandya store board and thanks the police for their help.

Angrily Dhara storms up to Shweta and tries to slap her but Shweta swats her hand away and tells her that those hands will be used to sweep the Shweta store.

Raavi and Rishita spit out the fact that the carelessness of all of them has cost them the Pandya store.

© Copyright tellybest.com, 2022, 2023. All Rights Reserved. Unauthorized use and/or duplication of any material from tellybest.com without written permission is strictly prohibited.
Cached Saved on: Wednesday 25th of January 2023 12:32:42 PMCached Disp on: Wednesday 1st of February 2023 09:07:23 PM