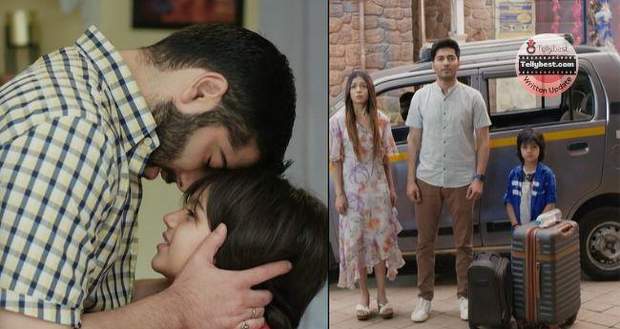 At the same time, Rishita pushes Chiku intentionally while walking past him which makes Gautam angry and he yells that he can understand her anger for him but he will not tolerate any bad behavior towards Chiku.

Even Dev calls Rishita childish and reminds her that Chiku was just a baby when all this happened.

Meanwhile, Shiva expresses his confusion to everyone about not being able to understand how time passed so easily but Raavi calms him down by urging him not to take too much stress.

Afterward, when they enter the hall, they get surprised to see the Uttarayan decoration which brings back the old uttarayan memories to them.

In the meantime, looking at Shesh, a soft smile appears on Krish’s face and he spreads his hands to grab him but stops himself at the last moment when he notices Shesh hugging Dev.

Meanwhile, Shiva urges Shesh to come close to him so he can embrace him in a hug and Shesh walks toward him frightened.

Shiva even urges Mithu to meet Shesh who hides behind Raavi’s legs and mutters that he will not go near Shesh as he will beat him again.

Noticing Mithu’s meek nature, Rishita mocks Raavi by saying that she has made Mithu stupid and angry while Raavi announces that Rishita’s dominant nature is still the same.

Raavi further adds that at least her son is not turned into a goon but before Rishita can yell any further, Dev holds her back.

After this, Dev meets Gomby’s smiley face who is walking towards him but Dev ignores him by announcing that he needs to pack the luggage.

Once Dev walks away, Shiva hugs Gomby and gets surprised when Gautam smells like alcohol.

He asks about this to Gomby who mentions that since his support was not here, he found calmness in other bad things.

When Shiva informs Gautam that he could have asked him to come out if he needed any help as he was inside the room only, Gautam and Krish look surprised but don’t say anything.

Gautam then even tries to talk to Krish but Krish ignores him and asks about Suman’s hospital name.

Krish urges everyone to ride with him to the hospital as soon as Gautam reveals the location.

Gautam gets upset seeing the ignorance of his brothers but he does not say anything.

They even drive away without taking Gautam and Chiku with them and when Rishita asks Raavi about how long she is planning to stay, Raavi mentions that she is here to see Suman only otherwise she would not have come.

Krish also tells everyone that he is just here to get closure.

Meanwhile, on one hand, Dhara is praying to God to not take Suman from her; on the other hand, Chiku takes a promise to Gautam that he will not drink alcohol from now on.

Later, Dhara gets surprised to see the whole Pandya family enter the hospital but she runs to urge Suman to die as this is the only thing that has brought her family here.

Finding Dhara at the doorstep, Suman calls her rotten papaya and mentions that she is all right and can home now.

Dhara requests Suman to die as this is the only to keep the Pandya brothers here and Suman nods eagerly whereas Rishita and Raavi discuss that their wounds are so deep that Dhara's tears will not be able to keep them now.

Afterward, when they enter the hospital room, Dhara stands there spreading her hands but no one of her sons even looks at her.

Looking at her sons, Suman slaps them each for coming so late and announces that she is about to die.

© Copyright tellybest.com, 2022, 2023. All Rights Reserved. Unauthorized use and/or duplication of any material from tellybest.com without written permission is strictly prohibited.
Cached Saved on: Wednesday 25th of January 2023 09:35:03 AMCached Disp on: Wednesday 1st of February 2023 08:36:32 PM