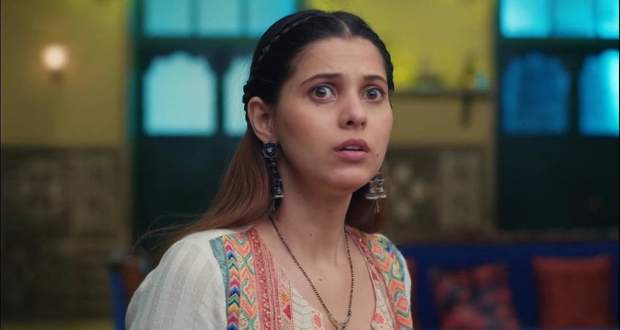 He declines to enrol in college because by then everyone would have heard about his breakup with Kirti and would be making fun of him.

Shiva hands him a piece of paper and instructs him to complete an inventory before entering the goods into the database.

After giving Rishita a big hug at the Pandyas' home, Dhara begs her to calm down and apologises to her.

She claims that she had no intention of keeping the family in the dark because she believed the situation to be resolved.

Dhara tells Rishita to enjoy her pregnancy and let her take care of Krish.

Just then, the curd vendor appears and demands payment.

The curd vendor makes fun of Dhara by questioning if Suman discovered any theft in the home after snatching her the locker keys.

After hearing this, Suman smiles and feels the strength of the locker keys and slumbers while holding them.

Raavi provides her fans with a live tour of the newly remodelled home and introduces herself and displays a sleeping Suman.

She talks about how severe she is and how she claims to carry the locker key with her at all times.

Dhara approaches Suman and requests money but the key tumbles down into the pit as Suman gets startled by Dhara's tripping.

Raavi broadcasts this to her online audience while Suman scolds her for showing this to everyone in the room and is instructed to locate the key.

Gautam receives a call from Dhara asking him to come home and retrieve the key that has fallen into the well.

To create a new key, Gautam brings a key maker. Suman is instructed by Gautam to open the lock because everyone is awaiting payment.

The laundry woman also arrives at the same time and requests payment.

Suman, who is adamant in her choice, requests to dive into the well.

Meanwhile, everything is covered in Raavi's live stream.

Dev creates Shiva's social media account at the Pandya Store and he becomes enraged with Raavi for displaying her followers their family issues at that point.

In the meanwhile, Dhara notifies the key maker not to go while Suman yells at him to get out.