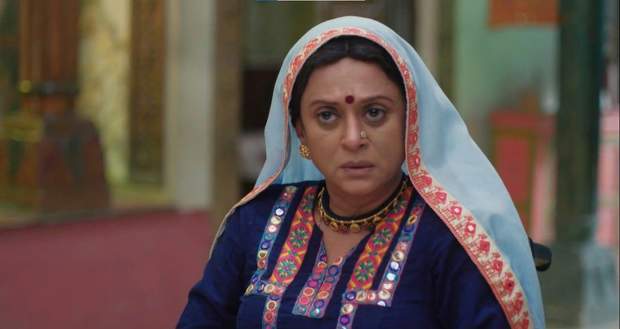 Today's Pandya Store 23rd May 2022 episode starts with Shiva circling the tempo on a clear ground and demanding Kamini to reveal where Dev and Rishita are.

Feeling satisfied, Shiva stops the truck and Kamini tries to run away but he manages to catch up to her.

He demands her to reveal Rishita and Dev's location while she starts blabbering that Dev and Rishita's baby will be in danger if they return to the Pandya house as Rishita is getting a lot of stress.

Feeling annoyed, Dev says that he knows what she's doing and shouts at her for trying to separate the Pandya house.

Later, Shiva returns to the hospital and informs the family that Dev and Rishita have gone to Ahmedabad for the baby's health.

The family collectively decides to not inform Dev of Suman's condition until he returns.

Elsewhere, Dev decides to call back Dhara but his phone drops in the water.

He goes to Rishita who tells him that she wants to return to Somnath but Dev convinces her to stay back for some more days.

Back at the hospital, the doctor tells the Pandya family that they can discharge Suman and take her home as the chances of her improving at the hospital are not very good.

She suggests they take her home and keep her around the family to improve her health rather than wasting money and time by keeping her at the hospital.

Later, at the Pandya house, Raavi sits in Suman's wheelchair and acts like her to cheer up the family and get a reaction out of Suman.

Luckily, Suman starts moving her finger and asks with half her mouth moving about Dev and Rishita.

Gautam tells her that he will bring them back once she gets well.

Dhara also assures Suman by promising her that she will make Dev and Rishita return permanently.

Later, Dhara tells Gautam that they have to go back on their words and tells him that she wants him to accept the job at Janardan's house.

With a determined voice, Dhara says that she will bring Dev and Rishita back to Pandya's house at any cost.