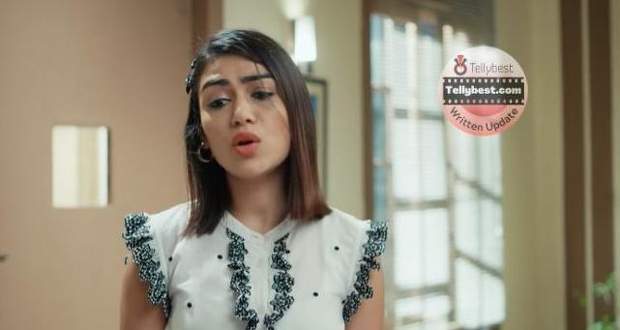 Dhara reveals that Dr. Nitin, the junior doctor is Shweta’s old friend and he forged the reports.

Rishita intervenes and makes Raavi realise that she was wrong to trust Shweta.

Then, Raavi points out that Shweta was the only one who knew the shirt prices and wonders why Shweta broke Raavi and Shiva’s relationship instead of Rishita and Dev’s relationship.

Meanwhile, Shiva is beaten badly and the doctor checks up on him and gives him pain medicines.

The Pandya women decide to teach Shweta a lesson, Rishita declares that Shweta’s life in Pandya house is going to be hellish from now on and Rishita leaves.

On the other hand, Shweta starts to clean up the compound but she accidentally slips on the water and to her rescue, Krish holds her and instructs her to clean up and make dinner.

Meanwhile, Dhara feeds Raavi and makes sure she is fed nicely and rests properly.

At the Pandya house, Shweta dances with a broom and Rishita sees this and confronts her.

Rishita tells Shweta in a taunting way that Dhara and Raavi will be home soon.

On the other hand, Shiva is lying on road unable to move due to the pain and he wonders why no one in the world cares for him.

He sees no calls or no messages and thinks that no one has time to even think about him.

In the Pandya house, Shweta serves everyone pizza while Rishita tells everyone that the last time when she made pizza Suman had severe stomach aches.

Dev cuts in while Rishita was speaking and he says that Rishita should have helped Shweta.

Suman declares that Rishita and Shweta have to take care of all the chores and household work.

Rishita then declares that she isn’t Dhara that she will do all the work, and tells everyone that she is on strike and will not work in-house.

Shweta panicky tries to persuade Rishita to not go on strike but she is shot down.

Shweta thinks about how she will handle all this.

Krish tries to call Shiva but Gautam screams that no one will call him and leaves the room.

Meanwhile, Dhara gets a call from Gautam, he enquires about Shiva but to his disappointment, even Dhara knows nothing about him.

Dhara asks Gautam to come to visit her as all the drama that happened in the house was done purposely and she knows who the real culprit is.

© Copyright tellybest.com, 2022, 2023. All Rights Reserved. Unauthorized use and/or duplication of any material from tellybest.com without written permission is strictly prohibited.
Cached Saved on: Wednesday 23rd of November 2022 11:30:26 PMCached Disp on: Saturday 10th of December 2022 03:23:26 PM