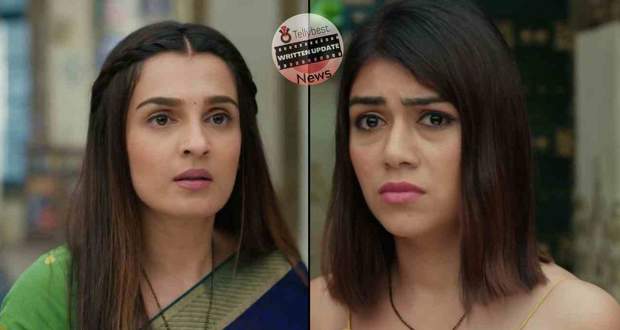 Looking at Arnab expressing his concern for Raavi’s injury, Shiva feels irritated and runs after Raavi.

Meanwhile, Krish thinks that Shweta has also abandoned him.

On the other hand, Shweta’s mom orders Shweta to return to Pandya’s house otherwise she will be homeless.

She even adds that she will not let Shweta destroy Krish’s life and at the same time Shweta’s phone starts ringing.

Shweta’s mom picks up the call and happily informs him that Shweta is here with them as she was missing them.

Krish breathes a sigh of relief and feels sheepish for thinking Shweta has run away and cuts the call.

While walking away, Shweta blames Dhara for ruining her plan.

In the meantime, Dhara goes to Suman’s room to ask her for permission so Chiku can sleep with her for a few days.

At first, Suman teases Dhara for taking authority of Chiku, but when Dhara replies that she is doing it to give Krish and Shweta some time to get to know each other, Suman agrees.

On the other hand, Krish finds Shweta’s passport and starts searching for other passports in anticipation as he thinks Shweta is taking him to Dubai but finds none.

Before he can dwell on the thought, Dev arrives there, and Krish puts the things quickly.

Dev then questions Krish if Shweta has run away but Krish narrates that Shweta is with her parents.

Looking at Krish’s sweaty face, Dev again questions him if he is okay and Krish lies.

On the other hand, Shiva gets shocked to see Raavi’s injury and questions her why she only told Arnab not him but Ravai stays silent.

Afterward, Raavi and Shiva get into a heated argument about this while Dev lies to Arnab that their neighbors are bantering.

Dev then also says that Shweta has gone to parler so she cannot meet Arnab now and Arnab walks away.

Later, Dev meets Krish in the hallway and exclaims in horror that if Shweta has run away then Rishita will chew his ears with her nonstop saying "I told You".

Krish looks at Dev with frustration and yells that he does not care about Krish's life but only his.

Krish further questions Dev why he married Rishita if he feared her so much and Dev announces that he did not know Shweta can be scary.

On the other hand, Raavi cuts herself by mistake while decorating Krish's room, and Shiva warps his handkerchief around her finger.

Raavi however throws the handkerchief away and stares at shiva with anger.

Meanwhile, Dhara finds Dev and Krish in the hallway and questions them about Shweta.

© Copyright tellybest.com, 2022, 2023. All Rights Reserved. Unauthorized use and/or duplication of any material from tellybest.com without written permission is strictly prohibited.
Cached Saved on: Monday 21st of November 2022 06:58:56 AMCached Disp on: Wednesday 7th of December 2022 03:03:48 PM