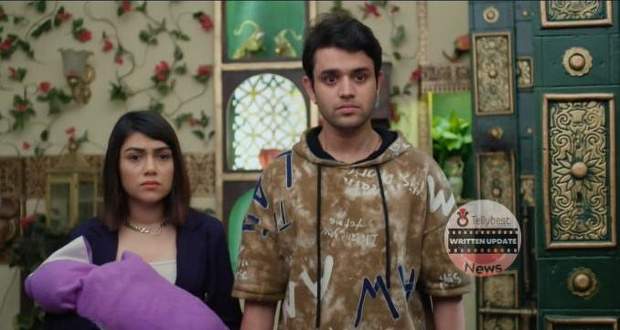 Today's Pandya Store 23rd September 2022 episode starts with Swetha telling Krish that she tried to persuade Suman and failed and leaves saying that she hopes he finds a better partner.

As she is walking towards the door with a smile on her face, Krish stops her and asks her if she wants to marry him and won't regret it in the future.

Keeping up her act, Swetha says that they have their whole lives afterward to get to know each other and tells him that she is ready to marry him.

Krish tells her that they can marry at a temple and walks towards the door when Suman shouts for Krish.

Krish sighs in relief but gets shocked when Suman tells him that she will not let him in if he gets married to Swetha.

However, Krish tells her that he knows she will soon accept.

Krish tries to emotionally blackmail the family saying that her blood runs in his veins.

Suman looks at him angrily and tells him that they are not related and beats him with a stick while crying.

Suman tells Krish that he has hurt her more than the rest of the brothers combined and tells him to leave Pandya's house.

However, Swetha lets go of Krish's hand and tell him that she won't agree to marry without the elder's permission and hugs her mother telling her that they cannot separate a son from their family.

Swetha leaves while Krish tells Suman that she once again reminded him that he is not important to them.

Just then, they hear Swetha's shout and rush outside to see that she has been in an accident.

Rishita thinks that Swetha is doing drama while Krish takes her in his arms and brings her inside.

When Swetha doesn't wake up, her mother starts blaming Suman but Dhara speaks up for Suman and tells Swetha's mother that she has no right to talk to Suman this way.

Just then, Swetha wakes up and feels upset that she is back in the Pandya house when her mother tells her that they should go home as she doesn't want her to get married to Krish anymore.

Suman holds Swetha's hand dramatically and stops her while the Pandya family gets hopeful that Suman might agree to the marriage.

Suman tells Swetha that she feels Swetha might be able to keep her son Krish happy and agrees to the marriage.

Everyone rejoices except for Swetha and Rishita who are unhappy with the decision.

The families start talking about wedding preparations while Suman thinks that she will make Krish confess that he's marrying only for Dhara's sake.