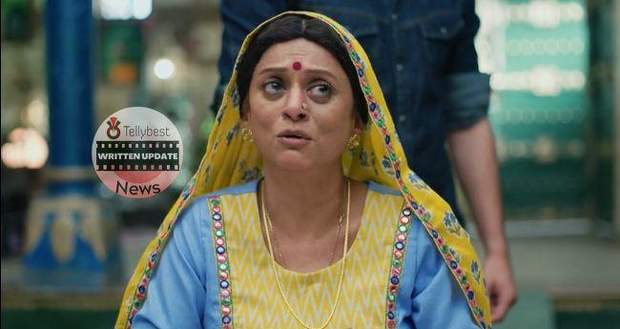 Today's Pandya Store 24th August 2022 episode starts with Rishita telling Dev that she doesn't mind Chiku but she doesn't want Dhara to share her special day with others.

Just then, Kamini comes there and tells Rishita that she couldn't hold herself back and came to meet them.

Back outside, Dhara takes the call from Raavi and tells Aayush that Raavi is coming for the shoot.

Raavi thanks Dhara while Dhara tells her to keep Chutki's clothes at the pooja place and separate Chiku's clothes so that it doesn't create any problems for Rishita.

On the other hand, another Panditji comes instead of the one who was originally supposed to come and Kamini tells him that the naming ceremony is for two kids and not one.

Later, Dev and Rishita sit with Chutki in their hands and start the pooja while Rishita's family comes there with the crib.

Meanwhile, at the Photoshoot, the camera breaks down and Raavi has to stay back longer to complete the shoot.

Back at the Pandya house, Suman asks Dhara about Raavi, and Dhara says that Raavi will be there soon.

Afterward, Dhara goes upstairs to bring the gold necklace that she got for Chutki while Kamini asks who will name the baby.

Dev states that Dhara will do it since, for him, Dhara is a sister, mother, and daughter-in-law.

Later, Rishita notices the two items in the Pooja and questions the Panditji who reveals that he was told to prepare for two babies naming ceremonies.

In anger, Rishita questions who told Panditji, and Panditji points toward Kamini.

However, Kamini moves away and everyone thinks that the Panditji is pointing toward Dhara who is coming downstairs.

Rishita stands up saying that she doesn't want to name Chutki today anymore and is about to leave but gets stopped by the family.

Dev tells Rishita to not create drama while two outfits, one of Chutki and one of Chiku are shown which infuriates Rishita even more.

Rishita states that Dhara did it purposefully while Kalyani blames Dhara and isn't able to digest the fact that the Pandya family's heir is not her child but Rishita's child.

Suman shouts at Kalyani to stop and tells everyone that as long as Chiku is with them, he is a part of the family.

On the other hand, Dev also states that Chiku will be named alongside Chutki.

© Copyright tellybest.com, 2020, 2021. All Rights Reserved. Unauthorized use and/or duplication of any material from tellybest.com without written permission is strictly prohibited.
Cached Saved on: Sunday 2nd of October 2022 06:40:11 AMCached Disp on: Wednesday 5th of October 2022 05:30:11 PM