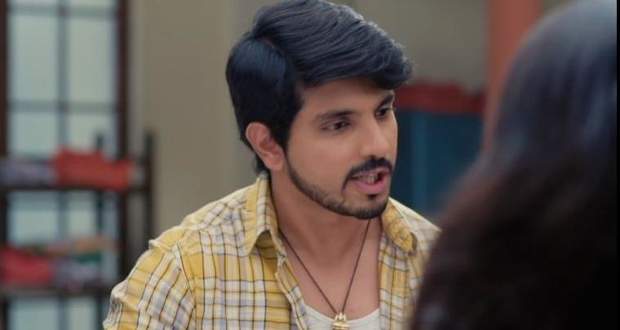 Today's Pandya Stores 24 Jan episode starts with Dhara trying to make Tara go to sleep and when Dhara gets up, she gets her hand hurt.

Dhara goes to the kitchen to get Haldi to apply on her injury but at the same time, Dhara sees Rishita in the kitchen.

Immediately, Dhara hides, and then Suman enters and asks Rishita if there is any update about Raavi but she answers in negative.

Rishita also says that she is more worried about Dhara to which Suman says Dhara should think about the mother of the baby and when they find her they will return the baby.

At the same time, Dhara overhears their talks and says she will live in the house itself but no one will be able to find her.

Meanwhile, Gautam is worried about Dhara but Krish calms him and says they will find Dhara soon.

In the next scene, Rishita calls Shiva and says that they have found the location of Raavi and asks him to go there immediately.

Three people are seen talking about sending Raavi out of the country the next morning.  Shiva enters that house, and a girl opens the door.

Shiva shows Raavi's photo and the girl says that Raavi had an accident with her car and then she brought Raavi to her house but Raavi has run away sometime before.

In the meantime, Shiva searches the whole house but does not find Raavi and then he leaves the house.

The next morning, Shiva sees a girl on the road and thinks that it is Raavi. He tries to stop her but she starts running.

Shiva follows her and she enters the Pandya house. Shiva finds her and the girl turns out to be Dhara.

Dhara asserts that she won't allow anyone to snatch Tara from her and when she tries to go away, Suman and Rishita enter.