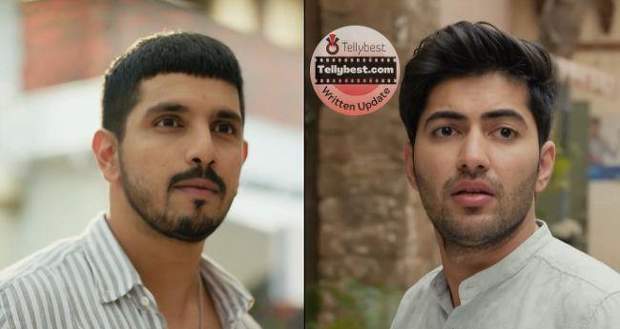 Today's Pandya Store 24th January 2023 episode starts with Suman slapping her sons for coming so late in a low whisper.

Pandya’s brothers then hug Suman tightly while mumbling that nothing will happen to Suman now and Suman announces that since she has seen her sons now, it is easy for her to die.

When Suman reveals that her sons have come to visit her without any call or anything, which is called blood relation, Chiku reminds her that he is the one who called them.

Meanwhile, Shiva feels confused as he cannot wrap his mind around Suman being very ill all of a sudden and announces that Suman should have informed him about her illness since he was in the next room.

While Suman looks at Shiva with wide eyes, Raavi urges Shiva to calm down and when Shiva urges to take Suman home, Raavi tells them that Suman needs to stay here.

To change the subject, Dev introduces Shesh and Shiva introduces Mithu to Suman which brings tears to Suman’s eyes.

Suman then again starts her drama by saying that she is going to die and Rishita urges her to take deep breaths.

In reply, Suman tells her that her "sans" (breath) and Rishita’s saas (mother-in-law) cannot do anything.

Dhara feels confused as she is unsure if she should bring holy water for Suman or should discharge her.

When Gomby urges Dhara to call the doctor, Dhara orders him to sit beside Suman and cry.

On the other hand, Chiku and Mithu find Shesh cutting the wire of the telephone and Chiku teases him by saying that he is scared of Rishita.

To prove he is not scared of anything, Shesh challenges Chiku that he will put down the main switch and Chiku agree to do it.

Back in the hospital room, Suman expresses her last wish of taking her last breath at her home but Krish reminds her that she should stay here as the hospital has many facilities.

After slapping Krish on his cheek, Suman mutters that she does not want to die on a hospital bed.

Realizing Shiva is talking to her for the first time, Dhara is about to put her hand on his face but Raavi comes in between and reminds Dhara that they are here for Suman’s treatment only.

Suman then orders them to continue the argument as she can die and come back from death.

On the other hand, when Mithu mentions that the main switchboard is very high, Shesh stands on Chiku’s shoulder to put down the switch but they end up falling to the ground.

However, Shiva’s head starts hurting as he cannot remember anything and Raavi tries to calm him down.

Afterward, Suman scolds Raavi for hiding about Mithu, and when Raavi mentions that she was about to tell her, Suman asks her if she was planning to invite her to Mithu’s wedding.

While Shiva keeps asking everyone what happened in seven years, Raavi gets worried as she does not think Shiva can handle all the memories.

Suman even scolds Shiva by asking him if his brain has lost connection.

Meanwhile, Dhara rejects Dev and Krish's offer to pay the hospital bill as she has managed everything alone till now for the past seven years.

On the other hand, Mithu stands on Chiku's shoulder and Shesh on top but still they are not able to put down the main switch

© Copyright tellybest.com, 2022, 2023. All Rights Reserved. Unauthorized use and/or duplication of any material from tellybest.com without written permission is strictly prohibited.
Cached Saved on: Wednesday 25th of January 2023 08:52:18 AMCached Disp on: Tuesday 31st of January 2023 07:27:45 PM