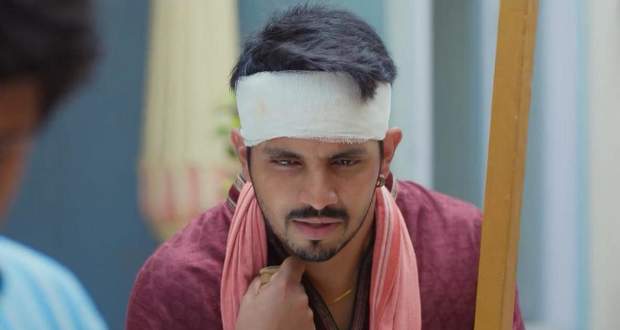 Today's Pandya Store 24th June 2022 episode starts with Dhara thinking that Raavi had mistakenly kept the cupboard open and closes it unknown to the fact that Shiva is hiding inside.

Shiva feels trapped knowing that he can't kick open the door which can make the family feel suspicious when he heard someone entering the room.

Raavi comes inside and cries looking at Shiva's pictures while Shiva whispers that he's right there while getting emotional.

Raavi calms herself and opens the cupboard while being lost in thoughts.

Shiva holds the end of her dupatta and sobs silently while Raavi cries holding one of Shiva's shirts.

Further, Raavi leaves while Shiva gets his back of clothes and sneaks out through the window.

Later, Shiva sneaks into Prafulla's storage room thinking to use it as his hiding place.

Just then, he hears Prafulla's footsteps and hides while she enters the storage room.

Prafulla gets distracted by a call while Shiva sneaks into another room inside the storage room.

Elsewhere, Raavi feels Shiva's presence in her room and opens the cupboard without any reason.

Back at Prafulla's house, she sets the dinner table and goes to bring water while Shiva sneaks in and eats all of the dinners.

Further, she hides under the table while Prafulla comes back and gets shocked to see her dinner missing.

She gets scared thinking that some thief came to her house and eaten dinner.

The next morning, Shiva comes to the Pandya house as a bangle seller and requests Dhara to buy it from him.

Rishita also comes there and says to buy for Raavi as she likes bangles.

Further, Rishita goes to bring Raavi while Shiva drops some bangles near Dhara's feet and sneakily takes her blessings while picking up the bangles.

Shiva admires Raavi and further puts the bangles on her while Raavi takes Shiva's hand subconsciously.

Just then, Dhara sees police coming to the house and rushes there while Shiva runs away.

The police inform Dhara that many people are lying about their family member's death to get the compensation money and say that they got a call that someone saw Shiva alive.

© Copyright tellybest.com, 2022, 2023. All Rights Reserved. Unauthorized use and/or duplication of any material from tellybest.com without written permission is strictly prohibited.
Cached Saved on: Friday 18th of November 2022 03:44:51 PMCached Disp on: Friday 9th of December 2022 05:02:37 PM