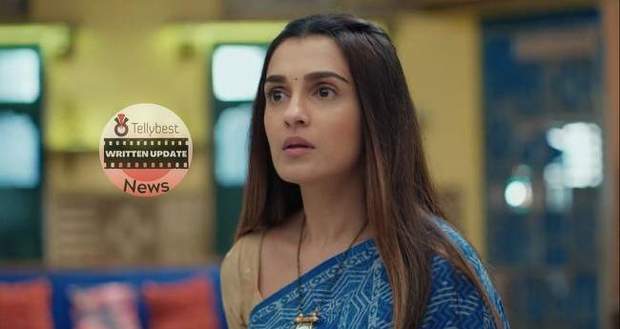 Today's Pandya Store 24th September 2022 episode starts with Suman telling Dhara to take care of Chiku and she gets happy while Rishita keeps on looking at everyone.

Later, Suman is distributing duties for the marriage while Rishita just sits and glares at everyone.

Krish comes there and apologizes to Suman saying that he spoke very badly against her today.

Further, Dhara looks for Swetha everywhere while Rishita says that she must have run away due to marriage.

Just then, Swetha comes there with things for the Puja and gives the items to Dhara.

At night, Swetha wonders what to do next for her plan while Krish comes there and asks her if she's ready for marriage since he didn't ask her first.

Swetha acts nice and tells Krish that it turned out nice that he proposed to her and makes Krish happy with her words as he leaves.

Further, Swetha gets a call from Forum who informs her that she is running away to Dubai since the police are still looking for her.

Swetha promises to handle all the expenses and even tells her that she will also elope to Dubai after all the drama.

Forum asks what drama and Swetha informs her about her marriage with Krish and reveals that she's planning to do a domestic violence case against him so that she can get out of the marriage.

Forum gets shocked and tells Swetha to talk to her parents and not ruin Krish's life but Swetha says that her parents are very quick.

Just then, Rishita barges into Swetha's room and confronts her while Swetha tells her that she demands some respect as she is soon going to be a daughter-in-law of the family.

Swetha worries that it might be Forum and starts scolding Rishita about breaching her privacy and making her leave.

On the other hand, Dhara is getting ready while Gautam comes there and flirts with her saying she will be wholly his after Krish gets married.

Dhara tells him that she has work and tries to leave but Gautam picks her up in his arms and twirls her around.

Just then, Dev comes there and apologizes while Gautam lies that he was just checking Dhara's weight.

Dev jumps on Gautam's lap and tells him to check his weight too after which he tells them to close the door and romance.

Further, Rishita manages to recall Forum's number and calls her when Dhara comes inside the room at the same time.

However, Forum disconnects as soon as she hears Dhara calling out to Rishita and destroys the sim card.

Rishita vents her anger on Dhara while Dhara gets angry at her disrespectful tone.