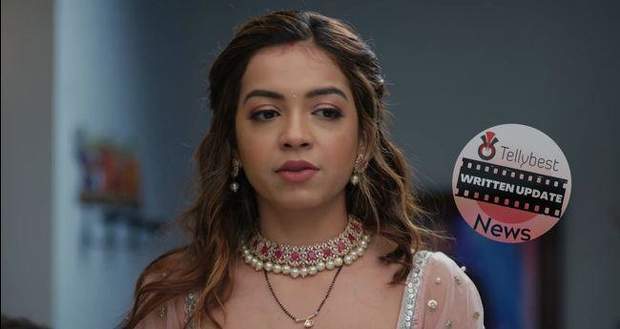 Today's Pandya Store 25th August 2022 episode starts with Suman telling Rishita that as long as Chiku is in Dhara’s care, he is a member of the Pandya family.

Dhara tells Suman that they should not intrude on Chutki’s big day.

However, Suman pays no heed to her and asks Dhara to tell a name for Chutki and she will name Chiku herself.

At that moment, Raavi comes rushing home with jewellery for Chutki.

The neighbour comments on Raavi’s simple attire and her quest for money which Shiva finds offensive.

Afterwards, Suman asks Dhara to sit in the veneration along with Rishita.

After a while, the day changes and the Janmashtmi festival begins which they all celebrate with pomp.

After the function, Rishita cribs about sharing Chutki’s special day with Cheeku and gets angry at Dev.

Just then, Suman asks Dhara to come down and asks her if she has any care for Cheeku or not.

Rishita who has been feeling insecure about Chutki taunts Dhara and Suman about giving special attention to Cheeku despite him not being a Pandya.

Dev tries to calm her but Rishita has had enough and tells Dev that she will talk about this matter today.

However, Rishita also finds a point of conflict in both the gifts and tells Dev that she wants to know why Cheeku’s gift is made of Gold while Chutki’s is of Silver.

Suman explains to Rishita that when Gombi was born her father had money but by the time Dev came into the world, her father has lost his fortune and that's why Dev’s Haye Chandrama is made of silver.

Suman also tells Rishita that it was her parent's duty to get the Haye Chandrama for her granddaughter which they have failed.

As Rishita walks out feeling hurt, Suman asks Dev to talk some sense in Rishita.

The next morning, Shweta is making plans with her friends to go on a holiday.

On the other hand, Raavi is talking to someone on phone and refusing their offer to shoot out of Somnath.

Dhara overhears her conversation and asks Raavi why is she hesitating to go out of Somnath when she is getting a chance.

Raavi talks about setting boundaries in her career and that Shiva also does not like her doing this work.

Shiva overhears Raavi's half conversation and argues with Ravi for calling him a villain while Ravi tells him to go to hell if he cannot understand her.

© Copyright tellybest.com, 2020, 2021. All Rights Reserved. Unauthorized use and/or duplication of any material from tellybest.com without written permission is strictly prohibited.
Cached Saved on: Saturday 1st of October 2022 12:45:37 AM