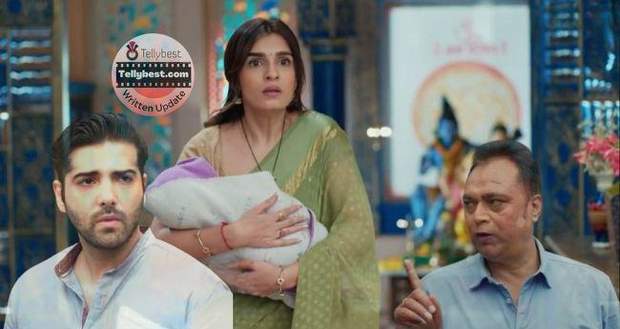 Today's Pandya Store 25th December 2022 episode starts with Raavi telling Dhara that every time decisions are forced on them and they were forced to sign the papers.

Rishita also blames Gautam for ruining everyone’s life with his own mistakes and Gautam looks shattered.

Gautam looks around, sees disrespect in his brothers’ eyes, and feels ashamed.

When Gautam promises everyone that he will get the Pandya store back from Swetha very soon, Suman questions him about how he will do this as he does not have any Kohinoor gem in his bank account.

Suman even accuses Gautam of losing the family property and the last reserve of her old age.

When Suman yells in a tear-choked voice that soon her sons will find jobs but she does not have anything to rely on.

Hearing this, Dhara turns to Suman to tell her that Suman will always be a priority, but Suman announces Dhara now only loves Chiku, not her sons.

While Dhara stares at Suman with wide eyes, Chiku starts crying and Dhara picks him up in her arms.

Dhara then tells everyone that if she knew they would have to pay this big cost for having Chiku she would not choose him while looking at Chiku in motherly love.

Rishita, however, yells that even if Dhara knew it beforehand she would still choose Chiku causing Dhara to turn toward her in shock.

When Rishita starts laughing sarcastically, Krish orders her to close her mouth, and Rishita questions Dhara about Chiku’s adoption papers.

Everyone jerks their head up in confusion after hearing this question and Gautam reveals that he forgot to take the papers from Swetha.

While Suman looks at Gomby with disappointment, Rishita sarcastically remarks that now Swetha not only has the money and the store but also Chiku’s adoption papers.

On the other hand, in the hotel, while Swetha is counting the money, Harikishan and Jhankana arrive there.

Jhankana then shouts at Swetha for taking Pandya Store away from the Pandya family despite having twenty-five lakhs.

In response, Swetha accuses Jhankana of giving Dhara the property papers but Jhankana slaps Swetha hard for it.

Meanwhile, in Pandya’s house, Dhara announces she will not let Chiku go from her anymore and Raavi questions her about how she will keep Chiku like this.

Elsewhere, in the hotel, Jhankana blames Swetha for soiling their reputation but Swetha announces she will take Chiku back as soon as he turns eighteen years old to get the property.

In the meantime, in Pandya’s house, Dhara breaks down in tears and Rishita sits beside her to console her.

Rishita then orders Krish to call Swetha to give him Chiku’s custodianship papers but arrogant Swetha cuts the call.

Later, on one hand, Raavi is making a video to upload to earn some money and Shiva calls someone to ask for a job; on the other hand, Rishita orders Dev to decide to go to Ahemdabad for a job while Dev looks shattered.

Meanwhile, Suman stares at Dhara and Gautam in the hall who are looking torn and Krish also joins them to tell them he is scared that maybe Swetha's words will come true.

On the other hand, Raavi gets hurt reading the hate comments to her post and when she questions Shiva if he really will do such low-class labor work, Shiva nods.

The next morning, some govt. officials arrive at Pandya's house and accuse Dhara of stealing Chiku and Dhara holds Chiku even tighter.

© Copyright tellybest.com, 2022, 2023. All Rights Reserved. Unauthorized use and/or duplication of any material from tellybest.com without written permission is strictly prohibited.
Cached Saved on: Wednesday 25th of January 2023 10:37:27 AMCached Disp on: Monday 6th of February 2023 06:04:08 AM