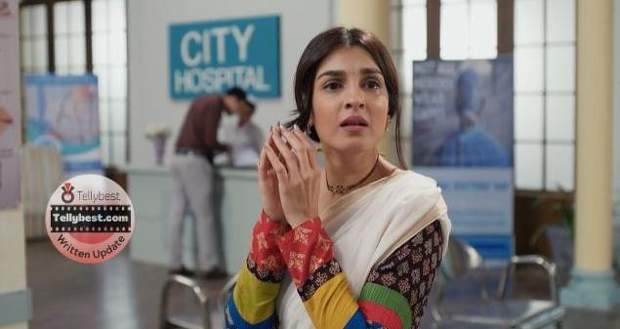 Today's Pandya Store 25th January 2023 episode starts with Dev and Krish asking the doctor if they can discharge Suman now.

Meanwhile, Chiku holds Shesh upon his shoulders as he tries to switch off the light of the entire hospital.

Mithu asks Chiku how much time it would take them to do so while Shesh replies in a minute.

Meanwhile, Dhara gets shocked to see all the lights off and she, along with Dev and Krish runs to Suman's ward.

Inside the wardroom, Rishita says that Shesh is gone as Raavi worries about Mitthu who is scared of the dark.

Both the Pandya Ladies go out to search for their kids along with Dhara who calls out Chiku.

Suman who is lying on the bed asks Shiva if his kid is a scaredy cat in reality or not since he was not in his childhood.

The Pandya's finally find the kids near the switcher and Rishita first scolds Shesh for creating trouble.

Raavi asks Rishita to tell Shesh not to bully Mitthu while Mithhu says it was Chiku's idea.

Dhara scolds Chiku for creating trouble for both Shesh and Mithu.

Meanwhile, Gomby helps Suman gets transferred from the stretcher to the ambulance bed while all the other Pandya brothers get into a big taxi.

Krish asks Dhara to come with them too but Dhara says she and Chiku can go by auto rickshaw.

Rishita makes a face and mumbles that everything has changed while Raavi says they cannot force anyone.

Rishita thinks that Dhara is still dramatic but in reality, Dhara makes a call to give orders for pizzas, and samosas, along with two cupboards so Shiva & Dev's family can adjust.

In the ambulance, Suman says who will do her "Pind Daan" (rituals after death) while Gautam asks her to be steady and not overthink.

The Pandya brothers reach back to Pandya Nivas and stare at the walls.

Shiva who is still overwhelmed that he doesn't remember anything in the last seven years gets rebuked by Raavi for not eating his medicine.

Raavi then threatens him of feeding his medicine to Mithu while Mithu tugs at Shiva's pant and ask him to gulp it down for his sake.

Shiva gets tears in his eyes when he enters his old room and remembers all the old memories he spent here with Raavi.

In the hall, Dhara serves tea and snacks, Rishita says that they are not here to eat but meet Suman.

Later, Gautam takes Suman to a nearby temple to worship the Shiv Linga while a young girl helps Suman pour her water since her hands shake.

Suman gets enchanted by the girl.

Back at the house, Rishita gets confused to see all the preparations being done by Dhara and Raavi also comes and makes it clear that they are not here to stay.

Meanwhile, Chiku shows marbles to Mithu and Shesh and asks them if they would like to play.

Shiva grumbles from his sleep as Chiku also asks him if he wants to play.

Shiva excitedly sees the marbles and joins the kids, while Raavi scolds Dhara for trying to make them stay as they are only here to take their SHARE.

© Copyright tellybest.com, 2022, 2023. All Rights Reserved. Unauthorized use and/or duplication of any material from tellybest.com without written permission is strictly prohibited.
Cached Saved on: Wednesday 25th of January 2023 11:56:57 PMCached Disp on: Sunday 5th of February 2023 03:51:01 AM