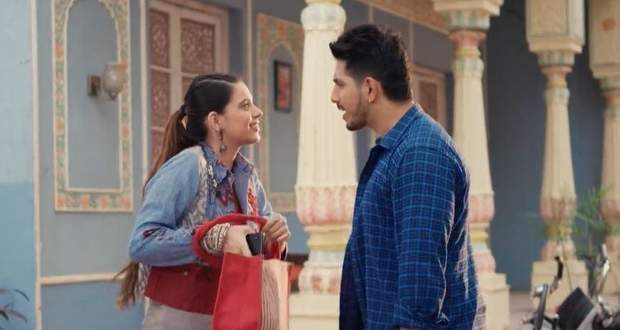 Today's Pandya Store 25th July 2022 episode starts with the key maker announcing that it would take three hours to produce new keys for the lock of Suman's room.

Finally, Suman consents to break the lock on her own as people are waiting for their money.

Meanwhile, the audience on Raavi's social media platforms is watching everything live which Raavi disconnects after realising she was live.

After giving everyone their money, Suman lets them go.

Later, Raavi is en route to deliver Shiva's lunch when Shiva confronts her about broadcasting their family crisis live to her social media followers and stops her in her tracks.

Shiva accuses Raavi of demeaning Dhara and Suman and is accused of doing so on purpose.

Raavi tries to explain to Shiva how important her family is to her and how her actions have helped a vegetable vendor attract more customers.

Shiva and Raavi are having a disagreement when a man intervenes, recognising Raavi and asking for a picture but Shiva rejects and departs.

Meanwhile, in the medical centre, Rishita and Dev experience joy when the baby is revealed by the sonography.

After viewing the sonography images of the child, Dhara becomes emotional and predicts that Rishita will be a good mother.

Later, Shiva looks through Raavi's online pictures and he sees some critical comments made under her posts.

Shiva receives a message from Raavi inviting him inside but he won't speak to her.

Shiva approaches Dhara claiming to have battled with Raavi and asks for her assistance in determining who is at fault.

Dhara declines to provide him with any guidance, claiming that she has already made many poor choices in the past, including getting Shiva married to Raavi. She sobs and takes responsibility for Krish's behaviour.

Shiva tells Dhara not to cry and promises to take care of his problem.

Later, Shiva finds Krish outside the home and they argue over making Dhara feel bad for what he did.

Shiva displays the mark on his back from lifting sacks and claims that after he saw Gautam lifting a sack one day, he made the decision to leave his study and go to work at the Pandya store.

He further makes fun of Krish for quitting his academics to date a woman cautioning Krish not to make Dhara cry once more.

© Copyright tellybest.com, 2020, 2021. All Rights Reserved. Unauthorized use and/or duplication of any material from tellybest.com without written permission is strictly prohibited.
Cached Saved on: Sunday 2nd of October 2022 06:56:17 AMCached Disp on: Thursday 6th of October 2022 05:03:44 PM