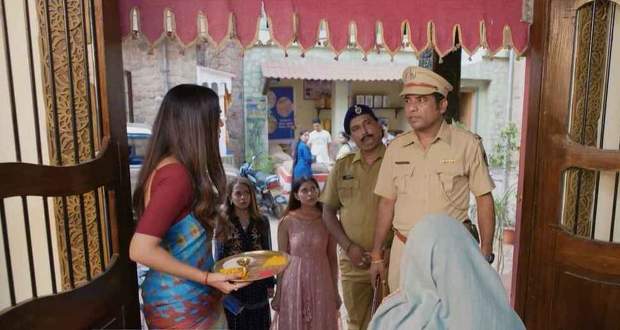 Today's Pandya Store 25th June 2022 episode starts with the constable telling Dhara that they have received a phone call saying some alcoholic has seen Shiva.

Raavi asks about Shiva while Police tell him that if Shiva is alive then he will not be able to escape for long.

They also tell them that if they are trying to fool the police for compensation then they will also go to jail.

Raavi tells Rishita that she has felt his presence in her room yesterday and she is sure that Shiva is alive.

Dhara goes to confirm her suspicion by finding the bangle seller.

Shiva understands Dhara’s motive and runs away from her.

Dhara runs after him and at a certain point catches him and sees his reflection in the water.

However, Shiva manages to escape her.

Dhara is happy to know that Shiva is alive.

Meanwhile, Panditji is trying to ward off Shiva’s spirit from Prafulla’s house.

Shiva who has come to drink water in the kitchen is spotted by Prafullla who panics to see him and calls Panditji.

Shiva chases Prafulla out of the house while Prafulla tells Dhara that she has seen Shiva’s ghost in her house.

Dhara compliments Shiva for hiding in an appropriate house where no one will think of looking for him.

Meanwhile, Prafulla comes running to Shiva’s house and tells Raavi and Suman that she has seen Shiva’s ghost in her house.

Meanwhile, Dhara goes to Prafulla’s house to search for Shiva.

Shiva escapes from the window to avoid being seen by Dhara.

Dhara sees the window open and Shiva’s white clothes and goes in search of him in that direction.

On the other hand, Suman gets angry at Prafulla for calling Shiva a ghost and tells her that if he is a ghost then why will he go to her instead of coming to him.

Elsewhere, Shiva dodges Dhara who was chasing him but comes to her rescue when a truck tries to run her over.

Raavi and Rishita come to Prafulla’s house to search for Shiva whom Raavi thinks is alive.

However, Raavi could not find him.

Meanwhile, Dhara is happy to see Shiva and hugs him with affection.