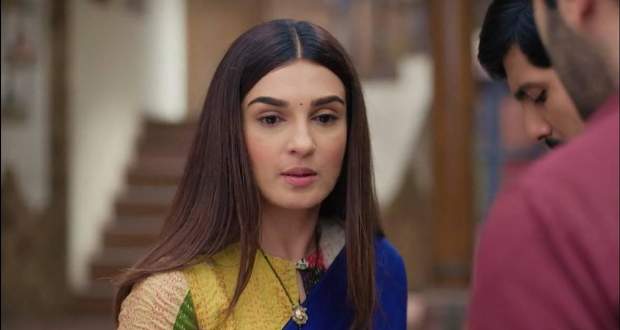 Today's Pandya Store 25th May 2022 episode starts with the Pandya family coming to Seth's house and giving the fake documents of Pandya's house to Janardan.

Janardan sees the document and narrows his eyes towards Gautam making the family worry that he knows the papers are fake.

However, before Janardan can say anything, he gets a call from Rishita to request him to send a driver when the plane lands and he agrees saying that he has hired a new driver.

Later, Janardan gives the key to the locker to Gautam and further orders them to wear the uniform he gives which has degrading tags such as Janardan's Sweeper, Janardan's Gardener, etc.

Afterward, Janardan tells Shiva to pick up Dev and Rishita from the airport while ordering the family to prepare for the party happening in the evening.

Shiva talks about Dev while Gautam shows Janardan a recording that states that he will take care of explaining things to Dev and Rishita.

Later in the kitchen, the Pandya family is preparing snacks for the party while Gautam tears the sleeve of his shirt and tells Shiva to cover his face when picking up Dev and Rishita from the airport.

Back at the Pandya house, Suman's neighbor sits with her and informs her of Janardan's party saying that he intends to humiliate them.

At the Seth house, the Pandya's serve drinks to the guests when Janardan asks everyone for attention and humiliates the family by calling all of them his servants.

Janardan makes Gautam personally greet all the guests but sees his shirt torn and tells him to get Kalanchoe flowers from the garden for the guests.

Meanwhile, at the airport, Shiva wears a mask and picks up Dev and Rishita.

Gautam brings Marigold flowers instead of Kalanchoe flowers and starts giving them out to the guest while Janardan looks on in anger.