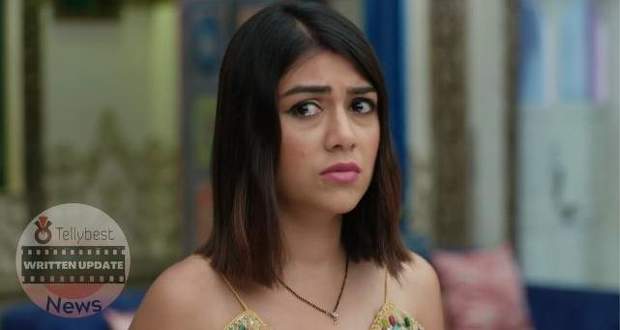 Today's Pandya Store 25th October 2022 episode starts with Swetha crying that because of Dhara she has to beg for money.

Meanwhile, Krish realizes the truth about Swetha marrying him only to get Chiku's custody while Swetha agrees to everything.

Swetha also reveals that she doesn't want Chiku and only wanted the money to escape.

Krish also reveals to Swetha that he married her only cause he wanted to give Chiku to Dhara.

Meanwhile, Dhara and Gautam are sitting on the swing on the balcony looking at the moon as they lay in each other's comfort.

Dhara recalls Deven's confession but puts it at the back of her mind thinking that Swetha has changed now.

Back in Krish's room, Swetha gets angry at him as she states that she would have given Chiku to Dhara had he told her.

Swetha cries saying that her life is ruined and blames Krish for it.

Away from the deranged couple, Raavi acts of falling asleep and gets upset as Shiva comes inside and doesn't even try to talk to her.

Back in Krish's room, Swetha tries to degrade Krish by telling him that he has no authority or respect in the house as he has to ask Dhara for money every time.

However, Krish says that she is wrong if she thinks he doesn't have money and states that he likes asking Dhara for money because he trusts her.

On the other hand, Rishita and Dev spend sweet moments teasing and hugging each other as Rishita thinks that she is glad Dev believes her now about Swetha.

Swetha tells Krish that Dhara will also become greedy once she sees the money coming into her bank account for Chiku.

However, Krish once again responds by telling her that Gautam and Dhara are going to spend their own money on Chiku and put the money into the investment that comes for Chiku from the bank account.

He also further tells Swetha that he does not want any more problems for the family and tells her to stay quiet.

Swetha asks him what he will do if she decides to leave while Krish happily tells her that she can leave if she wants.

However, Krish warns her that she will have to leave empty-handed if she tells them the truth.

Further, Krish tells Swetha to stay and convince her parents for custody after which she can leave with all the money she wants except for Chiku who will stay with the Pandya family only.

Krish leaves there while Swetha hits herself thinking that she had to keep up her act but revealed the truth in anger.

The next morning, Krish sits on the balcony while worrying about what to do to hide the truth about his relationship with Swetha from the family.

© Copyright tellybest.com, 2022, 2023. All Rights Reserved. Unauthorized use and/or duplication of any material from tellybest.com without written permission is strictly prohibited.
Cached Saved on: Monday 21st of November 2022 05:51:27 AMCached Disp on: Wednesday 7th of December 2022 02:44:13 PM