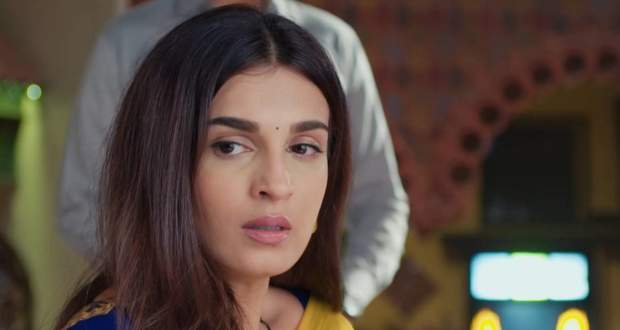 Today's Pandya Store 26th April 2022 episode starts with Shiva swearing to Rishita that he would make the Pandya store bigger than her store.

Raavi mentions the competition and says that the form has been uploaded.

Rishita hears this and decides to participate as well in order to defeat Shiva and Shiva accepts her challenge.

At night, Dhara asks Suman to go to her room and sleep but she refuses to leave the courtyard and asks Shiva to make Gautham sleep in her room.

Later, Raavi tells that she had made arrangements in their room for Gautham and Dhara.

Gautham and Dhara however say that they are good sleeping in the courtyard.

Suman then tries breaking the lock of Rishita’s room, and Dhara stops her.

Meanwhile, Rishita is anxious about getting selected for the competition.

Kirti consoles her while Rishita feels that her investment was less and goes on explaining her concerns regarding the business.

Kirti then tells her about Gautham’s accident.

Rishita gets shocked and rushes out to the Pandya house upon hearing the news.

In the Pandya house, Shiva decides to make a bed for Dhara and Gautham and Krish and Raavi helps him.

They start working together, and Suman is happy to see them.

Dhara gets emotional seeing them work and she hugs Shiva and starts crying and thanks him for his efforts.

Gautham tells Shiva and Krish that he feels lucky and says that he now has an extra power to face life.

Rishita comes to the Pandya house, she is shocked to see the house burnt.

Suman taunts Rishita that she had come to check her room and belongings.

Rishita asks Gautham about his condition.

Shiva taunts Rishita for making challenges with him and not enquiring about Gautham.

Rishita asks him to take business and family differently.

Dhara asks Rishita to have some food but she refuses by saying that her family would be waiting.

However, Gautham stops her, he says that they have always been waiting for her.

Rishita gets emotional as she recalls her memories at the Pandya house.

Rishita leaves the Pandya house, while Dhara is left clueless about how to bring back the family together.

© Copyright tellybest.com, 2020, 2021. All Rights Reserved. Unauthorized use and/or duplication of any material from tellybest.com without written permission is strictly prohibited.
Cached Saved on: Monday 29th of August 2022 02:00:25 AMCached Disp on: Saturday 24th of September 2022 11:12:09 PM