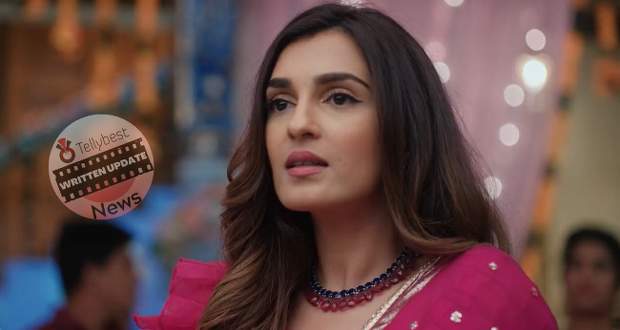 Dhara makes Shiva leave the kitchen and tries to explain to Raavi that Shiva just has some expectations from her as he loves her.

As advised, Dhara tells Raavi to give Shiva a tight hug to resolve their distance but Raavi leaves from there saying that she doesn't think anything can help their separation now.

On the other hand, Swetha's mother sits and worries wondering how her daughter can be so cold-hearted.

Just then, Suman and Krish come there while Swetha is overlooking their conversation from above.

Swetha's mother requests them to give her some time to convince Swetha into keeping the baby.

However, Suman states that she doesn't want her Dhara to get any more attached and demands Swetha's mother to convince Swetha or let Dhara legally adopt Chiku.

Suman and Krish leave while Swetha hopes that her mother agrees to give up the baby for adoption so that she can go back to her old life.

Back at the pandya house, Dhara tells Dev and Gautam about the constant fights between Shiva-Raavi and they form a plan to send the couple to a resort.

The next day, Dev and Gautam try to convince Shiva to go to the resort where Raavi has already gone by making him angry while Dhara is using the same tactic on Raavi.

Shiva and Raavi don't believe that the other wants to go somewhere with each other but fall into the trap and agree to go.

Further, at the resort, Shiva sees Raavi waiting for him at a table and sits down beside her hesitantly while she gets shy thinking that he has arranged their getaway.

Shiva apologizes to Raavi for his rude behavior while she tells him that they don't have room for formalities like an apology or anything in their relationship.

Feeling romantic, Shiva orders a single drink and two straws as Raavi puts her head on his shoulder.

Later, they both drink the same drink and dance together.

However, this all turns out to be Raavi's imagination as she keeps waiting for Shiva at the resort.

On the other hand, Shiva comes in front of the resort with a gift in hand but gets the resort mixed up and goes to the wrong place.

Shiva and Raavi wait for each other at the different resorts and grow resentful thinking that they are made to wait by the other person.