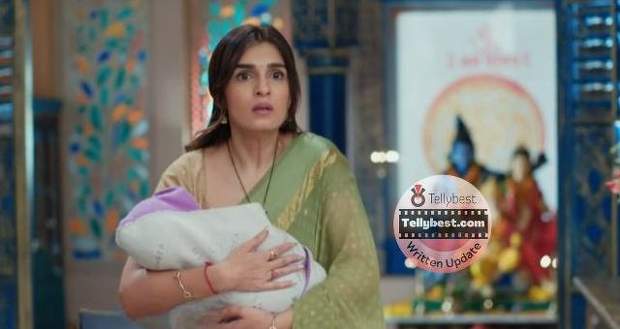 Today's Pandya Store 26th December 2022 episode starts with Krish opening the door and getting shocked to see the govt. officials.

The govt. officials then inform Dev that Swetha has lodged a complaint against the Pandya family for stealing her son.

When Dev questions them about who sent them, one of the officers announces that he is here to take Chiku away and starts showing everyone Chiku’s picture.

Looking at Chutki, the officer tries to match her face with the photo but Rishita hugs Chutki tighter and orders the officer to stay away.

The officer’s eyes then land on Dhara and he orders the lady officer to snatch the baby away from Dhara’s arms despite her protest.

While the officers are walking away with Chiku, the Pandya family runs after them to beg them to stop as Swetha is the one who has betrayed them.

Even Suman holds the officer’s hand but ends up cutting her wrist slightly.

In the middle of the chaos, Swetha arrives there with Chiku’s adoption papers and scolds the fake police for overacting.

Swetha then tells the Pandya family that she was just testing them and angry Krish runs after her causing Swetha to run inside the Pandya house.

Thinking Swetha may snatch the Pandya house away, Raavi and Rishita run towards her and before Swetha can lock the main gate, Rishita pushes it open.

Due to this, Swetha falls on a nearby table and requests the Pandya family to help her get up but no one even looks at her.

However, Krish grabs Swetha’s arm to kill her for this and drags her to the well while angrily muttering that he does not care even if he goes to jail for it.

Dhara who was standing close to the well slaps Krish for taking the law in his hands who lowers his eyes in shame.

When Swetha gives the papers, Rishita announces she will read them today and as soon as Rishita reads the paper, she orders Dhara to sign them and Dhara obeys.

Afterward, Swetha tries to touch Chiku for the last time but Dhara grabs her hand to throw her out of the house.

While dragging Swetha away, enraged Dhara tells her that she will never let anyone like her come close to Chiku.

When Dhara closes the door in Swetha’s face, Swetha thinks she will soon make Dhara alone in this.

Meanwhile, inside the house, Dhara promises everyone that she will take the store back from Swetha.

On the other hand, in the Pandya store, Swetha decides she will go with her assistant Jeetu and orders him to puts the poster on Swetha’s store door.

She then announces that she will also see how the Pandya family will buy the shop with love.

In the meantime, in Pandya’s house, Suman tells everyone that Swetha has insulted them in front of the colony.

Gomby tries to say something but Suman orders him to close his mouth.

Later in Pandya’s home, Rishita taunts Dhara for giving Suman the wound when Dhara gets shocked to see the cut on Suman’s hand.