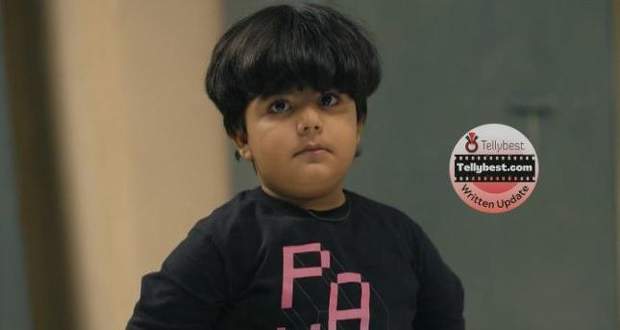 Today's Pandya Store 26th January 2023 episode starts with Dhara asking Raavi and Rishita what they want to say when Raavi asks her that Dhara needs to sell the Pandya house and store.

Dhara asks them if they have come home for money and not Suman and Rishita yells that they care about Suman but they need to be practical too.

Turing around, Dhara questions Dev if he has anything to say to which Dev replies that from here he lost his daughter so coming back here will be like re-opening his wounds with a grim expression on his face.

Dhara then asks Krish if he does not have anything to say and Krish reminds Dhara that he is dead for her already without any expression on his face.

Dhara tells them that they have moved on but for her time is still the same while everyone stares at her with grim expressions.

Looking at Krish, Dhara urges him to eat the snacks while Krish mentions that he is here to get closure only so he does not want any food.

Hearing this, Dhara tells Krish that he cannot get his closure on an empty stomach while Krish mentions that he has come home after seven years but none of his brothers cares about him.

Krish yells that he can understand Shiva is mentally unstable but Dev turned his face away when he entered the home.

Raavi also reveals that it is difficult for her to pay for Shiva’s medical fees and Mithu’s school fees alone.

When Rishita mentions that she and Dev both have lost their job and it is hard to maintain a lavish lifestyle in Ahmedabad, Dhara firmly decides that she will reunite this family at any cost.

On the other hand, Chiku opens the box and the marbles scatter onto the floor which reminds Shiva about the time when Raavi threw the marbles on the floor causing him to fall.

Afterward, Chiku, Mithu, and Shesh collect marbles while Shiva kneels beside them and he embraces everyone in a hug.

Inside the Pandya Nivas, Dhara sarcastically asks everyone if she should give poison to Suman when Rishita screams that they love Suman and don’t want her to die.

This makes Dhara pause and she announces that indeed they love Suman very much that they call Suman every day to check on her.

When Dev mentions that they never called because they knew Suman would urge them to come home, Dhara mutters that they must wait until Suman dies.

Elsewhere in the temple, a girl calls Suman a mom but she corrects herself just in time and Gautam takes Suman home.

After Suman leaves, the girl gets a call from Krish who asks her when she is coming home.

Back in Pandya’s house, Raavi notices Shiva playing with the kids and orders him to go back inside the room.

When Dhara asks Raavi what happened on that day, Raavi yells that Dhara is responsible for it and even grabs Dhara's arm when she tries to hug Shiva.

Dhara hugs Shiva anyway after mumbling that no one can keep Dhara from her son and even Mithu hugs Dhara causing Raavi to feel anxious.

Later while Rishita and Dev break down in tears as the room reminds them of Chutki, Dhara stands at the doorway and decides she will not let Suman be cured to keep the family intact.

© Copyright tellybest.com, 2022, 2023. All Rights Reserved. Unauthorized use and/or duplication of any material from tellybest.com without written permission is strictly prohibited.
Cached Saved on: Thursday 26th of January 2023 11:57:21 PMCached Disp on: Thursday 2nd of February 2023 08:37:17 PM