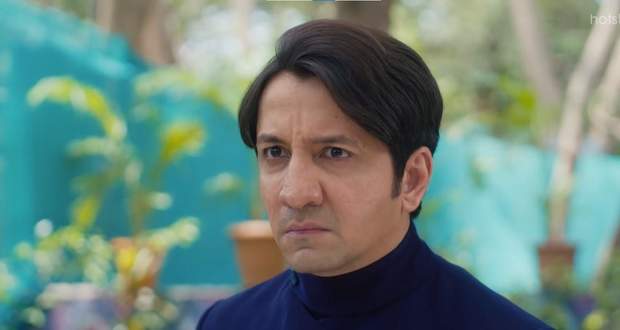 Today's Pandya Store 26th May 2022 episode starts with Dev telling Rishita that he wants to visit Suman first and ordering the driver to go to the Pandya house first.

Shiva tries to argue but stops and apologizes to them in his thoughts while continuing the conversation with them.

Meanwhile, at the Seth house, Janardan tells Gautam to put the shoes of the guests on the racks to humiliate him.

Gautam does the job with a smile while Dhara looks at him with a heartbreaking gaze.

Janardan starts ordering Dhara and Raavi while Dhara gets worried for Gautam.

Meanwhile, Dev and Rishita fall asleep in the car after which Shiva takes the car towards Seth's house.

Janardan drinks a soft drink and a plan forms in his mind.

Janardan spills the drink and orders Gautam to clean it up while a car honk is heard.

Dev and Rishita wake up as the car stops in front of Seth's house and decide to go to the Pandya house after freshening up.

The couple goes inside and gets shocked to see Gautam cleaning the floor.

Dev shouts and tells Gautam to stand up.

Dhara signals the rest of the family and they all start coming in front of Dev and Rishita shocking them further.

Dev gets angry and tells them to leave while Gautam argues that they need the money.

Dev demands to talk to Suman but the family lies that she has gone to Prayagraj.

Rishita starts scolding Janardan while telling Dhara that she is at fault too.

Dhara says that they need the job and that there is no other person who would hire the whole family for work.

Dhara stops Dev from interrupting and tells Rishita that the Pandya family can also look after her while working at Seth's house.

Dev and Rishita angrily go to their room while Gautam tells the Pandya family to get back to work.

The next day, Janardan and Kamini are discussing their next move while Kalyani reveals that she told the Pandya family to eat the last night's leftovers as breakfast.

© Copyright tellybest.com, 2020, 2021. All Rights Reserved. Unauthorized use and/or duplication of any material from tellybest.com without written permission is strictly prohibited.
Cached Saved on: Monday 3rd of October 2022 07:13:33 PM