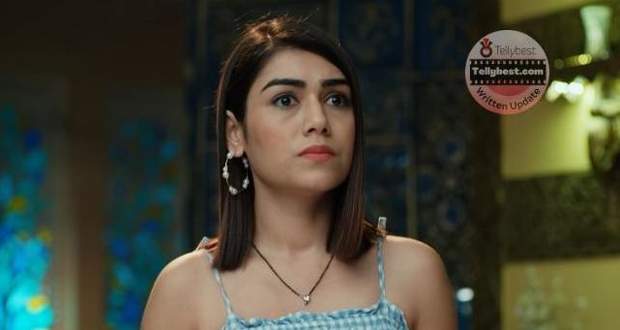 Today's Pandya Store 26th November 2022 episode starts with Dhara telling the receptionist that since Dr. Nitin has saved Rishita’s life, she worships him like a god.

The receptionist then gives Dhara the address and also adds that Dr. Nitin is going to leave the country very soon.

Afterward, Dhara calls Gomby to order him to catch Dr. Nitin in his home and cuts the call.

Gomby orders Dev to accompany him as soon as he cuts the call and drives away in the bike.

Watching Gomby and Dev drive away, Shiva mutters that his brothers now hide things from him and when Krish tries to talk to Shiva, Shiva orders him to take care of Chutki.

On the other hand, while Jhankana is telling Harikishan that she does not want to take a hasty decision, Swetha arrives there with food.

Swetha then happily informs them she has seen Dhara make the food so she cooked it today after learning from Suman and since Dhara has gone furniture shopping with Rishita, she wants to give the food to Raavi.

She further adds that Dhara is using the custody money for this and Gomby is yet to return the Goa trip money.

She even tells Jhankana that Dhara has left Chiku with Raavi which causes Jhankana to get angry.

Meanwhile, Dhara suggests Rishita behave like a mad person till she gets the footage.

While Rishita is creating chaos in the reception with a broom, Dhara runs to the CCTV room but her hopes are shattered when she finds someone has already deleted the footage.

On the other hand, Swetha gets happy seeing the Custody paper but orders Harikishan not to force Jhankana to sign it.

In the meantime, Gomby and Dev arrive near Dr. Nitin’s house and start pressing the calling bell while inside Nitin gets worried hearing the sound as he thinks Dhara and Rishita must have followed him here.

When Nitin does not open his door for a long time, Dev notices Nitin running away using the window, and Gomby runs after him while Dev drives his bike.

Meanwhile, noticing Rishita’s crazy behavior, the receptionist calls the police, and Rishita even stands up on the receptionist’s desk and orders everyone to play doctor with her in a kiddish voice and the police arrive there just then.

Dhara also arrives there at the same time and begs the police to let her sister go since she is sick.

Rishita and Dhara arrive there at the same time and questions Dev if they have caught Nitin but Dev replies negatively.

In the night, Rishita announces that if they want to teach Swetha a lesson then Dhara has to die.

© Copyright tellybest.com, 2022, 2023. All Rights Reserved. Unauthorized use and/or duplication of any material from tellybest.com without written permission is strictly prohibited.
Cached Saved on: Saturday 26th of November 2022 11:28:43 PMCached Disp on: Tuesday 6th of December 2022 12:39:27 PM