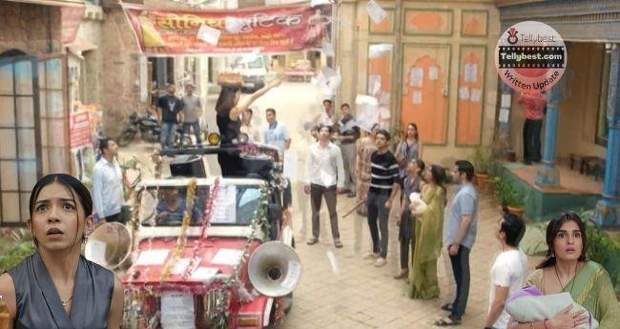 Swetha then starts announcing that the Pandya store is ready to sell and the street people are gossiping about Swetha.

Meanwhile, Dhara tells Rishita that she has gotten Chiku only because of the family while Rishita asks Dhara about what more damage she was expecting.

Getting angry after hearing this, Dhara asks Rishita if Rishita means she is responsible for it but Rishita yells that Chiku's one mom has taken everything from them and the other mom has let this happen.

This makes Dhara fume with anger and she announces she will beg everyone’s forgiveness.

Dhara then falls at Rishita’s feet to beg her forgiveness causing Rishita to flinch.

When Dhara reminds Rishita about how her fault forced them to take a home loan but no one accused her of the way she is doing now, Rishita looks at her with a gloomy expression.

They hear Swetha’s announcement and run out to check while Rishita mutters that another drama will happen now.

Even Suman also starts thinking about what new plan Swetha is cooking to torture them.

Later, when the Pandya family comes out, they get shocked to see Swetha standing in the seat of a Jeep and dancing.

Finding the Pandya family in front of her, Swetha’s announcement gets even louder about Pandya Store being on sale.

Meanwhile, Swetha announces that she will sell the Pandya store for only fifty lakh rupees so whoever has the money should contact her.

Looking at Swetha, Rishita whispers to Dhara that Dhara still has not figured out how to get Pandya’s store from Swetha and Shwetha is already planning to sell it.

On the other hand, recalling Swetha’s action and Raavi’s accusation against Dhara, Shiva feels rage bubbling up inside him while he is lying on a tree branch.

When Raavi arrives there to question him why he is here, Shiva replies that he feels bad for Dhara as everyone is accusing her and Raavi announces she has an amazing idea.

Shiva looks confused and Raavi whispers that Dhara can take money from Chiku’s account to buy the store from Swetha.

In the meantime, Dev gets so enraged upon hearing Swetha’s announcement and charges at her with a stick.

This causes Swetha to jump out of her jeep and run to a safe distance but Dev stands on the jeep seat to announce that their Pandya store is not for sale.

While Dev is standing in the jeep seat, Swetha smirks, and Krish notices Jeetu putting Pandya Store pamphlets on the Pandya house walls.

Krish runs after him with a stick while Rishita orders Krish to beat Jeetu.

Meanwhile, Shiva tells Raavi that he will not talk to Dhara about this making Raavi angry.

On the other hand, in Pandya’s house, everyone is stressed about how to arrange the money but Rishita orders everyone to do the medical insurance first and Suman also agrees.