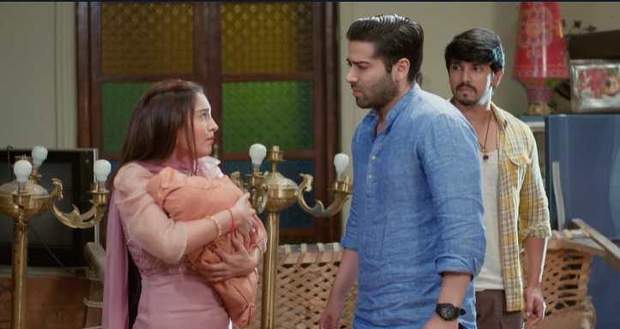 Today's Pandya Stores 27 Jan episode starts with Raavi waking up panicked and deciding to escape as soon as possible but pretends to sleep when she sees a woman coming.

Raavi hears the woman speaking on phone to a trafficker to come as soon as possible as she is afraid her family will come back looking for her again.

Back in the house, Dhara prays while saying she accepts her fate of being the mother of Dev, Shiva, and Krish and will never ask for a child.

Dhara regrets her act of stealing the child when Gautam explains to Dhara.

Meanwhile, Suman tells everyone how sorrow has two good things, one it brings everyone close, and the other it finishes at one point.

In the meantime, Prafulla shows the video of Shiva to the higher authority and asks for help to divorce her daughter.

Understanding the situation the officer tells the divorce will proceed within the next 5 days as this comes under a domestic violence case.

While back at home Dhara is furious at Shiva for not finding Raavi. Rishita tells Shiva Raavi’s location is still in that house, but Shiva thinks Raavi is having fun traveling.

Later, Shiva recalls he missed checking a room and run back to find Raavi again and tells no one to follow him and if he needs any help he will contact them.

Afterward, the traffic agent reaches the woman's house and gives a duplicate passport and visa.

When the woman goes back to the room to bring Raavi, Raavi finds an opportunity to escape from the room while Shiva reaches the house.

Raavi finds it difficult to escape as the men try to stop her. Raavi fights back and escapes only to find herself in a dead-end.

Shiva makes her jump down by making her believe that he will catch her. As Raavi has no other option she jumps out while Shiva catches her.

On the way back home Shiva receives the call from home and tells them Raavi is safe with him.

But Suman is still furious and tells everyone Raavi cannot stay in the house.