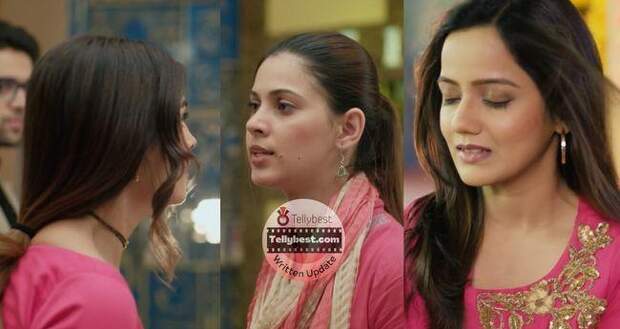 However, Shesh takes Mithu into Suman's room and throws marbles toward the television screen while trying to convince Mithu to do the same.

Chiku comes there and tries to stop Shesh but Shesh hurts his arms making him bend down in anger.

Just then, Shesh and Mithu throw the marbles at the TV screen and break it, making Chiku worry.

Meanwhile, Gautam brings Suman inside while the whole family rushes to greet him.

Dev asks them why they were late and Gautam reveals that they went to the temple to thank God for bringing the kids back home.

Dhara takes Suman inside while Gautam reveals to them that ever since they left, Suman has been going to the temple every day to pray for their return.

Rishita starts walking towards Suman's room but Dev stops her, telling her that she should not talk to Suman at this time since she is not well and her condition might worsen.

Meanwhile, Raavi argues that they cannot stay too long since the landlord has already threatened to throw them out if they do not pay all the due rent at the end of the month.

Shiva asks Raavi what landlord and house she is talking about since they are living with the Pandya family.

Dev calms Shiva while whispering to Raavi that he needs to talk to him about Shiva's condition.

Shiva gets furious and confronts Dev as to what is wrong with him while Dev again calms him and takes him to pray to God.

As everyone leaves, Gautam prays for the family to stay together.

Meanwhile, Suman cries to Dhara that she wants to talk to her children and wants to know how they were in the past seven years.

Dhara comforts her as she tells her that if she keeps up the drama of being sick, she will surely bring the family together.

Meanwhile, the kids see the elders inside the house and get worried thinking that Suman will beat them for breaking her TV.

Chiku looks at Suman and tells Mithu and Shesh that Suman will beat them with shoes, sandals, and other things.

However, Shesh calls them 'Fattu No.1' and 'Fattu No.2' for being scared of Dadi while Chiku tells him that he will become 'Fattu No.3' if he faces the wrath of Suman.

Shesh imagines Suman hitting him with the wooden stick and starts telling Mithu that he threw the marbles at the TV too.

Chiku tells them both to not worry and makes them clean up the room while he goes and stalls Suman and the rest of the family.

Suman gets angry seeing Chiku while Chiku asks her why she wants to do into a confined room when she can take her last breaths taking in the fresh air.

Mithu is about to reveal the TV being broken while Chiku puts a hand over his mouth as Cheeku distracts Suman by talking about spicy food.

However, Dhara tells Suman that she cannot eat it and Suman sadly tells her to bring her boiled vegetables.

Meanwhile, Rishita tells Raavi that she is sure Dhara taught Chiku to do all this drama.

Elsewhere, Krish and his wife are seen holding a free blood donation camp where he is offering food and stay in exchange for blood donation.

Suman goes inside her room and Chiku tries to cover the TV.

The cloth falls down and Suman gets angry seeing her TV broken.

At the same time, in Mumbai, a girl is seen breaking the TV and vases in her room with a baseball bat with anger.

Chiku and Shesh start blaming each other while Mithu refuses to come out of hiding in fear of Suman hitting him.

Back in Mumbai, the directors and spot boys gossip about Krish's offer for a blood donation while a lady tells him to send her the link to the video too.

However, the girl from earlier who was breaking vases rushes unto her arms complaining that she didn't get her juice.

The lady gets and it is revealed that she is none other than Swetha.

© Copyright tellybest.com, 2022, 2023. All Rights Reserved. Unauthorized use and/or duplication of any material from tellybest.com without written permission is strictly prohibited.
Cached Saved on: Saturday 28th of January 2023 12:00:08 AMCached Disp on: Thursday 2nd of February 2023 08:39:07 PM