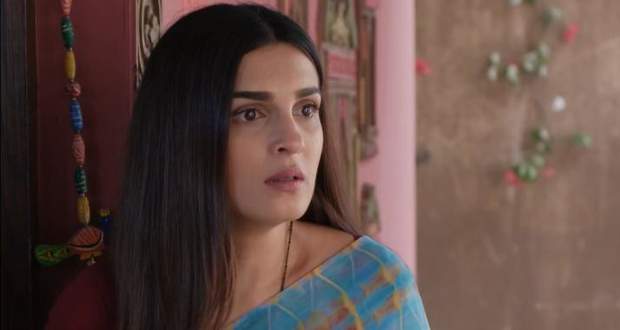 Today's Pandya Store 27th June 2022 episode starts with Dhara being saved by Shiva as she accidentally walks in front of a truck and hugs Shiva.

Dhara asks Shiva the reason behind not arriving back home even after getting back to Somnath.

Shiva explains how he got into the accident and the fisherman saved his life and couldn't contact them as they lived in a remote area.

Further, Dhara asks Shiva to call the family members and inform them but Shiva explains he is scared of the police and them getting arrested for taking the insurance money.

Dhara says he can live with the family as living away from the house will be dangerous.

Shiva asks Dhara to wait till he arranges money for the Pandya Store but Dhara insists on telling his truth to Raavi at least.

Shiva warns Dhara not to tell anyone anything while Dhara leaves to get Raavi.

Further, Shiva thinks of the deeds he might have done as he is facing the hardships of living away from the family even after being so close to them.

Dhara runs and shouts everyone's name while she brings the boxes of sweets.

Raavi asks the reason behind her happiness while Dhara gives her the sweet.

Suman thinks that Dhara has got a severe trauma after losing Shiva and guards off evil eyes from her.

Later, Dhara says that the sweets are offerings from the temple while Shiva looks at his family picture longing to meet them.

Shiva thinks of selling the land and taking a look at it in hiding as he is dead in the eyes of the world.

On the other hand, the Pandyas receive a letter stating that Shiva sold the land to Jeevan Lal.

Dhara tries to explain that Shiva cannot sell the land without informing them and Gombie agrees.

Meanwhile, Dhara asks Raavi to get ready for dinner which shocks Raavi.

Further, Shiva thinks of taking revenge on Jeevan Lal and his fraud with his family.

© Copyright tellybest.com, 2022, 2023. All Rights Reserved. Unauthorized use and/or duplication of any material from tellybest.com without written permission is strictly prohibited.
Cached Saved on: Friday 18th of November 2022 12:51:43 PMCached Disp on: Friday 9th of December 2022 05:05:38 PM