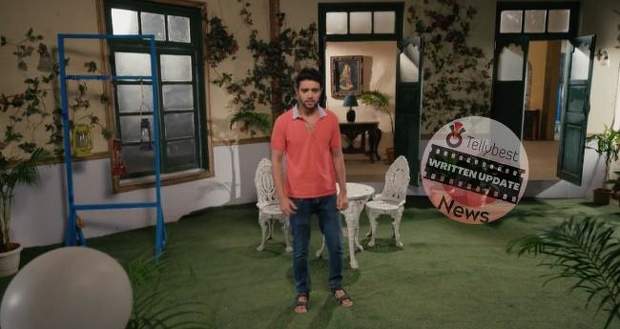 Today's Pandya Store 27th October 2022 episode starts with Dev getting a call from Dhara who informs him of Shiva not eating breakfast.

After Dhara cuts the call, Dev’s eyes fall on Krish and order him to focus on his college study.

Recalling Shweta’s taunts, Krish firmly announces that he needs to earn now as he is married.

Dev stares at Krish in shock and Gautam arrives there at the same time so Dev gets silent.

Dev then proceeds to tell Gautam that Shiva has become very insecure about Raavi’s friend Arnav and fights with her all the time.

Shiva gets angry after hearing this and questions Dev about what he will do if he finds Rishita roaming the streets with a different guy.

Though Dev tries to make Shiva understand that he and Rishita fight due to different opinions, Shiva just rolls his eyes.

Gautam then tells everyone happily about how his life has become happier after marrying Dhara while other Pandya brothers stare at him.

After angry Shiva walks away, Dev reminds Gautam that they need to interfere between Raavi and Shiva before Raavi decides to run away.

Krish who was overhearing their conversation orders Gautam and Dev not to think of such a thing as he can not imagine losing another wife.

Late, when Rishita informs Dev about Deven being Shweta’s friend and about her plan of making Shweta and Deven meet in the garden alone.

Dev reminds Rishita that her plan can fail very easily and he accepts a better plan from her.

Later, Gautam asks Dev how he can make his big brother cut onions.

Dhara arrived at the same time and gives them each gift to give Shweta after testing her first cooking.

When Dhara questions Rishita about what she will give Shweta as a gift, Rishita announces that she is going to give Shweta her precious blessing.

Rishita then sets up a projector in the hall and urges everyone to watch their favorite episode together.

Meanwhile, Shweta manipulates Raavi by informing her about her first cooking, and Suman is angry at her for adding extra lemon to Suman’s curry.

Later when Raavi arrives at the Pandya house, Suman starts calling her careless.

She further adds that Raavi has started ignoring her home responsibility after getting a job.

Angry Raavi yells at everyone for not telling her about Shweta’s first kitchen and not considering her important.

Hearing the yelling, Shweta starts dancing in the kitchen as her plan is successful.

Shweta then arrives outside and tries to console teary Raavi but Suman orders her to stay away.

Dhara tries to apologize to Raavi for not helping her in the morning but Raavi screams that Dhara was busy chit-chatting with Krish and Rishita was busy romancing with Dev.

Rishita however orders Raavi not to get envy of her and Dev’s relationship because of Raavi and Shiva’s broken relationship.

© Copyright tellybest.com, 2022, 2023. All Rights Reserved. Unauthorized use and/or duplication of any material from tellybest.com without written permission is strictly prohibited.
Cached Saved on: Monday 21st of November 2022 02:06:25 PMCached Disp on: Tuesday 29th of November 2022 10:36:14 AM