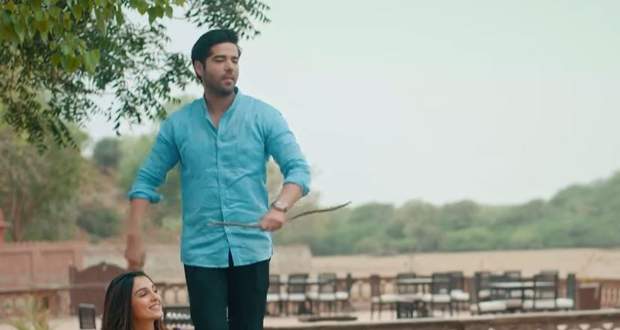 Dev and Rishita share a moment while Raavi and Shiva argue with each other.

Gautam and Dhara recall their moments while Rishita checks on Raavi. Rishita argues with Raavi over the room allotted for her.

Dev surprises Rishita while Dhara and Gautam spend time together.

Shiva saves Raavi from falling and confronts her as he thinks that she was attempting suicide.

Raavi tells him that she does not have any idea of suicide but wants to make his life hell by torturing him.

Rishita complains to Dev about the room while Krish falls for a girl.

Dhara assures Gautam about Shiva and Raavi's relation while Raavi and Shiva continue their silly fights.

Upcoming Pandaya Store episode update: Rishita gets scared as Shiva and Krish talk about a shadow.

© Copyright tellybest.com, 2020, 2021. All Rights Reserved. Unauthorized use and/or duplication of any material from tellybest.com without written permission is strictly prohibited.
Cached Saved on: Monday 29th of November 2021 10:03:06 AMCached Disp on: Wednesday 1st of December 2021 03:06:21 PM