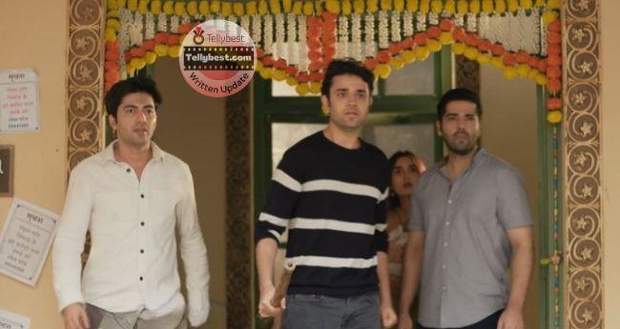 Today's Pandya Store 28th December 2022 episode starts with Dhara telling everyone that she is willing to sell her jewelry which will accumulate 5 or more lakhs.

Dev and Krish refuse Dhara to sell her jewelry but Gautam intervenes and tells them that this is a start.

So Dev suggests taking things to court but Rishita mocks him and says that it will waste all their left-out money as well.

At the same time, Jankana and Harikishan arrive at the Pandya house, and all the Pandya family get smug faces just by seeing them.

Enraged Suman taunts Jankana and Harikishan as they apologize so Jankana offers them aid to get the money Shweta asked for.

Jankana tells them that they can take 50 to 55 lakhs from Chiku’s account to buy their store again.

After hearing this, Suman’s face changes its color and she tells Jankana that she should have given this money to her daughter so that Shweta would not take everything from them.

From behind, Rishita takes a sigh of relief and says that they should take Chiku’s money and throw it at Shweta’s face.

Angrily Dhara tells Rishita that Chiku is her son and Jankana and Harikrishna have no right over him, therefore, taking money from them is not possible.

Rishita tells Dhara to think practically and Jankana backs her up and tells Suman that they can loan the money.

With a numb voice, Suman tells Jankana that they took Shweta in, and look where that got the whole Pandya family.

On the other hand, Rishita tells Jankana that she wants the money but they won’t pay interest and Dev tells her to stop.

Dhara butts in and tells that they won’t take the money and at the same time Suman comes in and gives Harikrishan the custodianship documents.

She further taunts Jankana for being a liar and says that they should leave.

Meanwhile, Dhara tells Jankana that they taught Shweta that money is the only thing that matters and promises Jankana that she will teach Chiku the power of family and togetherness.

Hearing all this, Jankana scolds Dhara that in her family there are multiple opinions that differ from Dhara’s own opinions but Dhara swiftly turns the tables and says Rishita is a child.

Further Dhara tells them to leave and as Jankana and Harikrishan leave Dhara gives them a bowl of kheer.

Rishita taunts Dhara that there is no unity in this family and Dhara does all this just to look big in people’s eyes.

Later, Arnav regrets what he did to Raavi so he calls her and offers her a job, and tells Raavi to meet him the next day.

At first, Raavi acts aloof and angry but by the end of the call, she tells him that she will think about meeting him.

In Gautam’s room, Dhara says that she has lost all hope and she pampers Chiku.

Gautam takes Chiku and his phone falls down, seeing the phone Dhara gets an idea.

She tells Gautam that they will spread a rumor about selling the Pandya house and trick Shweta just like she tricked them.